Poonam Mahajan, alias Poonam Vajendla Rao, is with the Bharatiya Janata Party (BJP) and is the incumbent Member of Parliament (MP) from the Mumbai North Central constituency, and president of the BJP youth wing. She is the daughter of the late BJP politician Pramod Mahajan. A firebrand leader, she is credited with having infused a lot of energy into the youth wing of the ruling party. She has a very strong social media presence, and her social media campaign is reportedly being led by Madhukeshwar Desai, vice president of BJYM and great grandson of Morarji Desai.

She contested elections for the first time as a Member of Legislative Assembly (MLA ) candidate from the Ghatkopar (West) Assembly constituency, but wasn’t successful.

She defeated incumbent MP Priya Dutt of the Indian National Congress (INC) in the 2014 Lok Sabha elections by a margin of 186771 votes. The constituency with 1737084 voters saw a turnout of 48.67% and she received 56.61% of the polled votes. Mahajan will be contesting for a second time from the same seat when Mumbai goes to polls on the 29th of April. 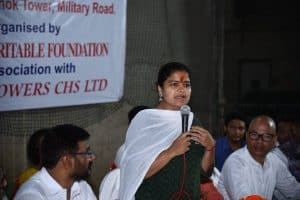 There has been an almost 98 percent decrease in the total assets of Mahajan from 2014 to 2019. She explained this stating that during the previous elections she had liabilities worth 41 crores which had to be cleared. In addition she said that her husband’s automobile business had run into losses.

There are two criminal cases pending against Mahajan under IPC section 138, which relate to the bouncing of cheques.

Mahajan has had average attendance in parliamentary sessions, and her participation  in debates and the number of questions asked has been below the state average.

Some of the debates that Mahajan has participated in relate to

Mahajan has introduced 9 private members’ bills in the Parliament, some of which are

MP in the news

Mahajan had courted controversy recently for several of her comments against rival political parties and politicians. She stated that the Mahagathbhandan (an anti BJP, anti Congress Political alliance) was a maha thug-bandhan(an alliance of thugs). She compared Sharad Pawar ( Nationalist Congress Party president) to a villainous character in Mahabharata. Similarly she cast aspersions at Mamata Banerjee and Priyanka Gandhi.

During the farmer’s protest march from Nashik to Mumbai in 2018, she had stated that the protest was propelled by Urban Maoists, and they were misguiding the farmers and infiltrating their march. Her remarks were criticized by  Communist Party of India( Marxist), NCP, and even BJP’s ally in Maharashtra Shiv Sena.

Mahajan and her husband has been accused by a Mumbai businessman Parvinder Singh in multiple cheque bouncing cases. Mahajan along with her husband were directors of the Aadya Motor Company Pvt Ltd (authorised dealers of Honda city cars). Parvinder Singh had purchased 11 Honda city cars from the company, but later decided to cancel it due to delay in delivery. He stated that only a small percentage was refunded initially and the rest after several follow ups was provided in cheques, which he claims bounced.

Mahajan became the first woman to be elected president of the Basketball Federation of India (the body that governs basketball in the country). She was elected unanimously and is currently serving the four year (2015-2019) term.

The candidate was caught in a Twitter controversy during her 2019 campaign, when she tweeted that she had met with members of the Advanced Locality Management (ALM) team in Bandra West, and had been assured of their vote for the candidate from her party’s alliance. However, she deleted this tweet, after a citizen categorically rejected her claim, replying that no such promise had been made.

Wanted: New thought and regulation for the informal sector in India in a post-COVID world

Delhi: 45 sanitation workers test positive for COVID, 15 succumb, but where are the yellow bins?

It takes a village: Small steps that can protect our children from abuse

What lies ahead for the six million working in urban retail stores?

Locked down? Here’s how to grow your own food and become self-reliant

Providing information, support and hope: How an association of Pune housing societies came together to fight the pandemic

Despite hundreds of crores spent on desilting, why Mumbai could still see flooding this monsoon

How to prevent deaths by suicide

How can one ensure fair rights for workers in the gig economy?

In e-learning push, corporation schools in Mumbai left in the lurch

COVID chaos in Delhi: Who stole all the hospital beds?

Banks of another kind: These help Dehradun manage its plastic waste efficiently