On May 7th, Aam Aadmi Party’s South Delhi Lok Sabha candidate Raghav Chadha unveiled the manifesto for his constituency in the presence of the party’s Delhi convener Gopal Rai. On the occasion, Chadha said, “Its not just promises but a resolution to resolve people’s grievances”.

Just a few days earlier, we had caught up with the candidate to know his plans and agenda on key issues for the constituency; here are some excerpts from the interview:

How is it that you entered politics and joined AAP?

Just like lakhs of people who gave up their careers and joined the India Against Corruption movement, I had joined this movement too. After that the AAP came into being with a commitment to improving people’s lives. I have been working with the party since its inception. The AAP has changed and impacted the lives of 16 lakh children which is a tremendous achievement.

What are the major issues in your constituency and how do you plan to solve them?

The constituency faces issues such as bad sewage infrastructure, damaged roads, potable piped water, drains, electricity and traffic. Transportation is also a major issue which can be resolved by bringing the metro rail under the Delhi government and adding more buses. There has been a trend of ‘politics of Gundaraaj’ in South Delhi, earlier known as outer Delhi constituency. That is why the party chief Arvind Kejriwal has chosen an educated candidate like me to ensure that the constituency gets maximum attention.

I want to take Arvind Kejriwal’s development-based politics forward. When AAP came to power, there was an acute water problem and problems with electricity bills and access to power. We addressed these issues by laying new water pipelines and reduced power tariffs. The regularisation of makeshift colonies has also been an important issue which many parties had promised to resolve. It was only AAP which prepared a blueprint to regularise these colonies. I think the people of South Delhi want an educated politician who can address core issues and stand with them when they need him. 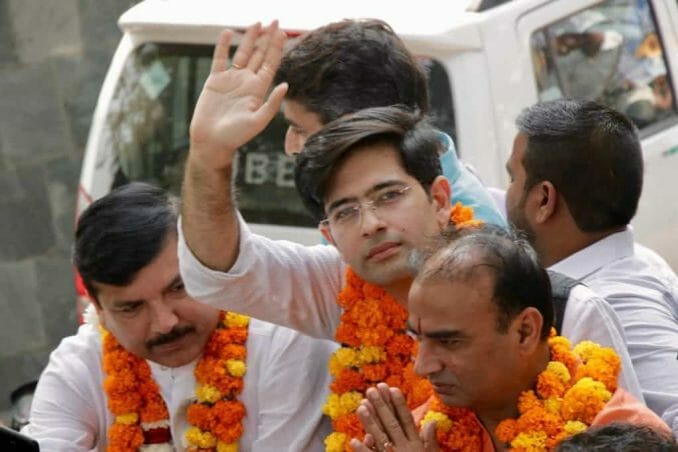 When people chose Prime Minister Narendra Modi in 2014, they strongly believed that their unfulfilled dreams would become a reality. The BJP had made tall promises over women’s safety, employment generation and attack on black money, but none of these issues were resolved by the BJP government. Prices of LPG cylinders and metro and bus tickets have all gone up in these five years. Women do not feel safe stepping out after 11 pm and the NSSO survey has established that unemployment is at a 40-year high after five years of BJP.

Can you explain why AAP is insisting on full statehood for Delhi?

AAP’s demand for full statehood is to resolve some critical issues which Delhi has been facing for long. For instance, If Delhi gets full statehood, the police and law enforcement agencies would come under the Delhi government which will enable Arvind Kejriwal to ensure that no women would feel unsafe to venture out after 11 pm. We aim to make Delhi one of the safest national capitals in the world.

When Delhi gets full statehood, Delhiites will get priority in getting jobs and admission in schools. AAP will convert makeshift colonies into permanent ones with basic facilities like water and sewage. Currently, people are scared their makeshift houses would be razed by the MCD and AAP does not have powers to stop this as these departments come under the union government. So it is very important that Delhi gets full statehood.

How do you plan to reduce pollution in Delhi?

Pollution is a serious issue but it is not a Delhi specific issue. It is an issue in a good part of north-India, as many other states are responsible for the deteriorating environment. Delhi alone cannot solve this problem though the AAP government has shown maximum commitment by adopting innovative schemes like odd-even scheme for vehicles and banning of construction and demolition activities.

When union environment minister Dr Harshvardhan called a meeting to discuss pollution, only the Delhi government showed up, the environment ministers of Rajasthan, Punjab and Haryana did not attend. This shows the Delhi government’s seriousness in tackling this issue. We need long term multiple solutions which can only be found when all stakeholders, for example the state governments of all north Indian states, sit together and talk about it.

Recently, it was reported that you found voter ID cards in garbage dumps in a few areas in South Delhi. Can you elaborate on this?

I am getting a lot of complaints from various people in my constituency whom I had helped obtain voter ID cards by setting up voter registration camps. Lakhs of voters were reinstated after BJP deleted 30 lakh voters from the electoral roles. People are not receiving the new voter ID cards because the process of dispatch and delivery has been hijacked by the BJP in areas like Chattarpar, Devli and Sangam Vihar to name a few. I am sure there is a nexus between BJP workers and booth level officers.

Why has the AAP not been able to stop the scourge of manual scavenging?

Our government has banned manual scavenging and we met with the Delhi Jal Board to discuss how technology can be explored to completely stop manual scavenging. We will put an end to it at the earliest.

About Vishwas 3 Articles
Vishwas is a Delhi-based journalist who covers urban development, environment and mobility.

Lok Sabha elections: Here’s how votes are counted to arrive at results

The wait for election results is nearly over. But how are the final numbers determined at the end of the mammoth democratic exercise? How is counting done? What happens if there is a discrepancy between VVPAT slips and EVMs? All your questions about counting of votes answered here

FAQ for voters in the Delhi Assembly Elections 2020

Casting your vote in Delhi on February 8th? Wondering if you could still do so without a voter ID card? Or how to locate your polling booth? Where to check for more information on candidates? Here is a handy guide for all the questions that you may be seeking answers to.

Zumba on the streets: A new trend in Indian cities?

From Mumbai to Chennai and Gurugram to Kochi, many Indian cities are hosting car free days when streets or stretches are closed to motorised vehicles and become a stage for recreational events. Here’s a look at these and the thought behind them.