Kanika*, a 15-year-old girl, carries her two-year-old sister Alisha in her arms. The portions of her hands and arms visible outside her half-sleeved magenta kurta are full of abrasions. “I’ve shown it to the doctor many times and he’s given me medicine but it remains itchy,” she says. She attributes the itchiness to the purportedly contaminated water in her home of one and a half years, in Anand Parbat transit camp. Her move to this central Delhi neighbourhood — five kilometres from her former home – was forced and put her out of school, Kanika recalls. “Alisha was an infant when our house was broken,” she says.

In October 2017, the Delhi Development Authority (DDA) had bulldozed over 400 houses, including Kanika’s, in Kathputli Colony – a jhuggi jhopri (JJ) cluster in Shadipur inhabited by puppeteers, musicians, magicians, acrobats, and other performing artists and craft-persons – after a nearly decade-long tussle. A major chunk of the evictees, around 2800 families are now housed in 12’x8’ single-room tenements built by DDA in Anand Parbat, reachable via a steep ascent from Patel Nagar.

DDA’s plan is to redevelop 5.22 hectares of Kathputli Colony into high rise buildings along with Raheja Developers as part of Delhi’s first in-situ (on the same location) slum redevelopment scheme under private-public partnership. Raheja is to provide 30 sq metre flats free to the slum-dwellers in a portion of the colony, covering the cost by developing high-end residential and commercial properties in the remaining area.

When we spoke to residents recently, their main worries appeared to revolve around the poor quantity and quality of water; unsanitary surroundings; reduced earnings and long, costly commutes; and uncertainty over voting rights in the 2019 General Elections.

While Kanika blames the quality of water, 24-year-old Anjana, whose three-month-old daughter Kaavya’s arms are filled with nodules and papules, pegs it on the short supply of drinking water. It is “available for only one hour in the (single) tap at the street corner.” Each street has 19-40 houses, which means lots of fights to fill a little share for each house. One of the facilities promised by the DDA at this transit camp was “RO filtered drinking water”.

The Transit Camp Authority has posted videos claiming residents are happy and the camp environment is “heavenly”. 13-year-old Shipra quietly holds up a white-coloured plastic container with yellow-tinged water that she’s filled from the toilet in her street. Shipra’s neighbour, 40-year-old Raj leads me into another of her street’s washrooms (each containing two bathing stalls and a toilet; one such washroom at either end of each street). There is no light and the floor is broken. “(Prime Minister Narendra) Modi should cut us all poor people with swords and get it over with,” Raj says angrily. 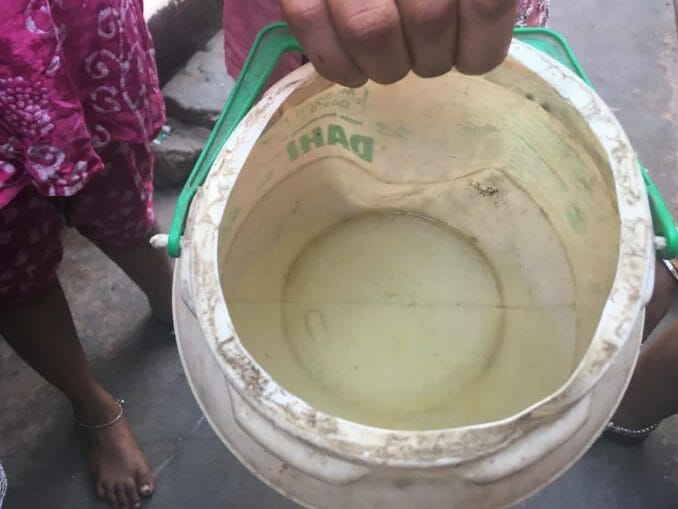 Meeta, a 30-year-old, who has followed along, complains that “no one comes to clean or to repair the washrooms. We’re living in hell.” Raheja Developers was supposed to maintain the camp but has refused to do so despite the Delhi CM’s intervention last year. The women claim they take turns to clean the washrooms — used by street residents of all ages and genders – themselves. But since “there’s no regular garbage-pickup,” as Shipra says, women can’t dispose sanitary napkins here during their periods. So, they are forced to use a public toilet located outside this camp, and that’s a 10-minute walk from these women’s street. “There (Kathputli Colony) we had a toilet in our house,” says Shipra.

The unsanitary conditions are not limited to toilets. There’s sewage flowing behind their houses, broken pipes, garbage-clogged drains running through lanes. The one-room houses are overcrowded – several families with up to four generations living together. The skin troubles that many of the residents – from infants to the elderly — bear can also be attributed to overcrowding in unhygienic surroundings. Moreover, these Aerocon-panel houses have bedbugs, as Gudiya, a middle-aged woman, claims.

Yet no one wants to complain to the DDA or to Raheja Developers, both of whom have offices at the entrance of this transit-camp complex. “Agar shikaayat bolenge unki toh humari file dead kar dega; If we complain about them (DDA and their provisions here) then they’ll not relocate us (back) to (rebuilt) Kathputli Colony,” Gudiya says.

“Meenakshi Lekhi hasn’t come to us even once since the 2014 election, only (Chief Minister Arvind) Kejriwal ji had come when our houses were demolished,” says Dileep Bhatt, a senior citizen. Lekhi is the New Delhi MP who is recontesting the same constituency. Incidentally, speaking against the contested redevelopment of Kathputli Colony is believed to be one of the election issues that gave Lekhi a comfortable victory from this constituency in the 2014 general elections. Her  performance in parliament, otherwise, has been strong, with the best utilisation of MPLAD funds among all of Delhi’s seven Lok Sabha constituencies. None of these funds, though, seem to have directly benefited these dislocated Delhi residents.

When Hardeep Singh Puri, union minister of State, Housing and Urban Affairs, laid the foundation stone for Kathputli redevelopment in April 2018 (where MP Lekhi was also present), he’d assured residents that houses would be ready by early 2019. That hasn’t materialised yet. The DDA has two years to rebuild from the date of notice of commencement of work (DDA project-website has no notices after December 2016, but its press releases state construction getting underway with foundation-laying in April 2018).

It all flows into the Yamuna

The infrastructure at the transit camp, that has already outlasted the span of two to five years that it was built to last, is already crumbling, and repair and maintenance seem absent. The build-up of sewage and garbage here would inevitably find its way to neighbouring, downstream areas like Patel Nagar and Baljeet Nagar.

Anand Parbat lies in the Najafgarh drain basin, meaning all the water from this area flows into a river, that in this case, is the Yamuna. This basin is a critically polluted area, as per the Central pollution Control Board, and that’s how the Najafgarh drain alone is responsible for 60% of Yamuna’s pollution in Delhi. With over 140 drains, it is the largest of three watersheds in Delhi, it is made up of 144 wards and houses 8.76 million people or 52% of the city’s population, acknowledges Delhi Jal Board.

Now, with the DDA placing this huge settlement of people in Anand Parbat (that Raheja Developers refuses to maintain) in the already polluted basin, the pollution is nothing but increasing. The sewage, solid waste, and sludge from the crowded settlement, located up a hill, are lying in the open drains here, and finding their way downhill. After entering the Najafgarh drain, this added waste from the settlement ultimately flows into the Yamuna — polluting the river, Delhi’s groundwater, soil, and the crops being grown on Yamuna floodplains.

While the Delhi Jal Board (DJB) already has a plan to improve the Najafgarh drain — by first tackling pollution from the drains that flow into it — the outcome of its efforts remain to be seen in Anand Parbat camp and its vicinity.

The ecology of this area is so stressed that the Union Ministry of Environment and Forests froze fresh grant of environmental clearances (ECs) in 2010 (projects needing built-up area of 20,000 square metres or more need ECs), even as the State Environment Impact Assessment Authority (SEIAA) is said to have continued giving clearances .

The camp is located on a hill, where water supply is only through tankers that go uphill through the narrow, traffic-infested lanes. Delhi Jal Board provides part of the requirement, and DDA claims to fulfill the balance need at its own cost. When the camp was being set-up, a borewell was dug, and that’s what supplies the khaara paani (hard water) to the two taps in front of each washroom of this settlement of thousands of people.

Massive resettlement and residential projects, such as the one at Anand Parbat, are altering all of Delhi. In Narela, for example, another relocation settlement, DDA housing projects have also given a garb of legitimacy to private builders trying to cash in by converting agricultural land into unauthorised colonies that pressure the city’s limited resources in an unstructured, uncontrolled way.

The Kathputli Colony redevelopment is more than the dislocation of a community, it’s a sustainability check for all of Delhi.

Coronavirus may go, but issues faced by migrant workers will remain

Interstate migrant workers form the backbone of the local economy, yet they have long been a faceless, voiceless community suffering due to hopelessly inadequate social security and class discrimination. The human crisis created by the coronavirus outbreak and resulting lockdown is just the manifestation of these deep-rooted issues.

Pune, Hyderabad bank on municipal bonds, but why are Kochi and Surat dithering?

The Centre has been actively promoting municipal bonds as a source to fund development of cities, but those with lower credit ratings may not find it a very smooth option to raise money through the same.

Hyderabad’s first second-level flyover, inaugurated with much fanfare, had to be closed down following two grave accidents, causing three deaths and several injuries. Increasingly, fingers are being pointed at glaring design issues, especially its dangerous curves and inclines.