The next time you think of buying a new cell phone or television on a whim, you might want to consider the effect it has on the environment and on human health.

Over 600 readers have donated over the years, to make articles like this one possible. We need your support to help Citizen Matters sustain and grow. Please do contribute today. Donate now

According to a recent study by researchers from University of Petroleum and Energy Studies (UPES), Dehradun, the generation of e-waste, in India, is growing at around 25 percent every year and is projected to increase as more people access electrical appliances and electronics. The study reviews the damage of e-waste to the environment and human health as well as occupational hazards faced by workers segregating electronic waste that has been improperly disposed. According to the study, this is a matter of serious concern as e-waste pollutes the environment and harms human health.

“Improper handling of e-waste exposes both the worker and environment to detrimental effects of toxic substances released during the processing of e-waste,” said Sayed Mohammad Tauseef, a professor at UPES who supervised the study. 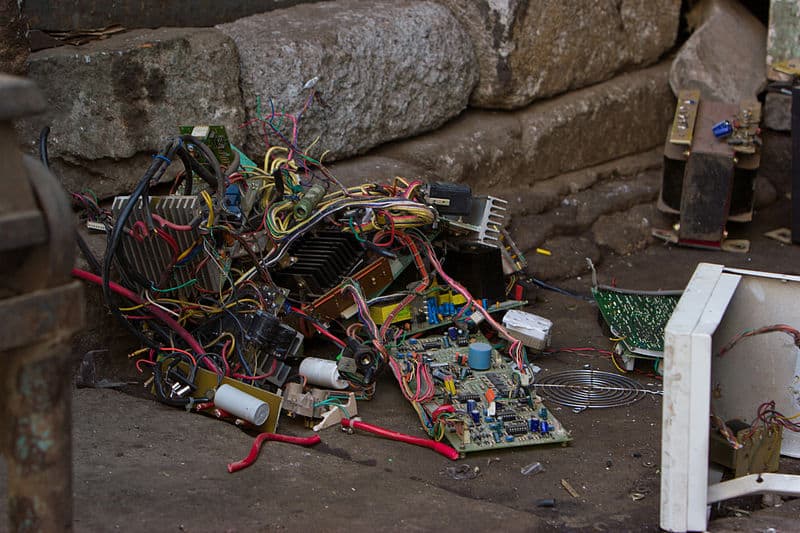 Electronic waste or e-waste is used to describe all electrical appliances and electronic devices that are discarded for reuse, recycle or dumped in the bin. E-waste can be classified into three categories: large household appliances, also called as white goods, such as refrigerators, washing machines and air conditioners; goods built on information technology and telecommunications, also known as grey goods, such as computers, laptops, mobile phones, printers; and consumer goods, also known as brown goods, like televisions, cameras and recorders.

All e-waste items can be classified either as hazardous or non-hazardous depending on the materials they are made of. These materials could be ferrous and non-ferrous metals, plastic, glass, wood, ceramic, rubber and others.

About 50 percent of e-waste comprises of iron and steel. Around 21 percent is made up of plastic and non-ferrous metals make up for 13 percent of the waste. A majority of the e-waste contains non-ferrous metals like copper and aluminium but also precious metals like gold, silver, platinum and palladium. But e-waste items also consists of elements like mercury, lead, zinc and cadmium that classify them as hazardous goods.

According to a  Global E-waste Monitor 2017 report, above 45 million metric tonnes (mmt) of e-waste is generated annually around the world. India is one of the countries that generates the most amount of e-waste, falling only behind China, the United States and Japan. China tops the charts with over seven mmt, the United States is second with nearly 6.5 mmt and India ranks fourth with two mmt of e-waste generated in 2016.

In India, the western region produces the most e-waste, accounting  35 percent of the e-waste generated in the country. South India produces 30 percent of the country’s e-waste while northern and eastern India account for 21 percent and 14 percent respectively. Maharashtra ranks highest among the states followed by Andhra Pradesh, Tamil Nadu, Uttar Pradesh, West Bengal, Delhi and Karnataka in the amount of e-waste generated.

Mumbai, the business capital of the country, produces the most e-waste at 96,000 metric tonnes (MT) every year. A chunk of Mumbai’s e-waste can be attributed to banks and corporates located in the city, that periodically dispose off their computer and telecommunication equipment. Delhi and the National Capital Region meanwhile generates 85,000 tonnes which is projected to increase to 1,50,000 tonnes in Delhi alone by 2020. The high quantities of e-waste are contaminating soil and groundwater in some parts of the city posing serious health risks to the citizens. Delhi, however, is considered the hub of e-waste recycling in the country as waste from other metros is sent to the capital for further processing.

Ranking right after Delhi and NCR is Bengaluru which creates 57,000 tonnes annually. With more than 1200 technology firms operating in Bengaluru, the city generates 1000 tonnes of plastic, 350 tonnes of copper, 300 tonnes of lead and 0.23 tonnes of mercury, indicating the hazards of e-waste the city is in danger of facing.

Chennai and Pune generate 47,000 tonnes and 19,000 tonnes respectively every year. 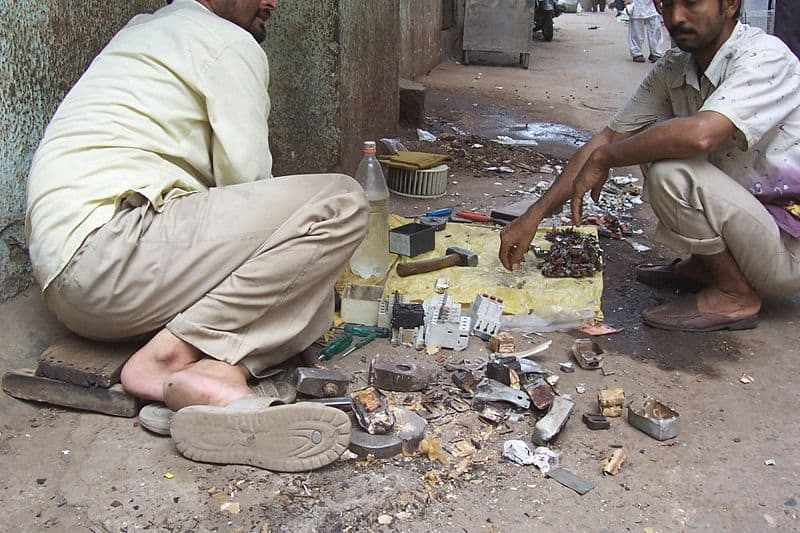 In India, about 95% of e-waste is recycled in the unorganised sector. “In the unorganized sector e-waste is dismantled to first recover the reusable parts and then electronic parts are burned to recover valuable metals,” Tauseef said. “This type of uncontrolled processing results in release of large amounts of pollutants into the atmosphere and exposes workers to great health risks. The remaining e-waste ends up in rivers and open dumps causing great damage to the environment.”

Workers, who often belong to low income groups, extract precious metals such as gold by dipping equipment in acid baths. They frequently do so without proper protective gear, exposing them to burns and skin ailments.

Shredding and breaking down e-waste brings people in direct contact with polychlorinated biphenyls (PCBs) present in capacitors and transformers. PCBs can damage immune and reproductive systems and even cause cancer.

Burning the plastic coating of cables, circuits and coils to extract metals like copper is another common practice. This releases pollutants like polyvinyl chloride, inhaling which can affect the nervous system and damage lungs. Ingestion of copper can damage liver and kidneys and cause chronic respiratory diseases.

Other harmful metals like lead, cadmium and mercury which are found in batteries, monitors and lamps can cause pain in muscles, headaches, loss of appetite, vomiting and diarrhoea.

Inefficient disposal of e-waste also contaminates water, soil and air. Toxic materials can get into food streams through agriculture or fish and animals that are consumed by humans.

To stop such scenarios in India and to deal with the new threat of e-waste, the Ministry of Environment, Forest and Climate Change (MoEFCC) came up with E-Waste Management Rules in 2016 but amended them earlier this year. As per the 2016 ruling the manufacturers of electronic equipment were supposed to collect them back after they have come to the end of their life. But the new ruling makes producers liable to collect only 10% of the e-waste generated in 2017-18, although this percentage increases yearly by 10%.

The latest amendment also gives the Central Pollution Control Board the authority to conduct random sampling of e-goods in the market to monitor the compliance of e-waste rules.

However, a more  long term solution to manage e-waste would be for manufacturers to develop environment friendly products that have a longer lifespan than the products currently in the market. “Companies aren’t designing products that are designed to last,” commented Priti Mahesh, chief programme coordinator of the team that looks at clean industry issues at Toxics Links. “There is no incentive to design products to last longer. The companies don’t really invest into research on improving the life-cycle of products.”

Stricter regulations and policies with regards to disposal of e-waste are the need of the hour. The Hazardous Wastes (Management, Handling and Transboundary Movement) Rules, 2008 allows import of waste only for reuse, recycling or reprocessing. The rule also allows for import of donated electronics and peripherals which are less than 10 years old. Such loopholes are exploited by Indian importers and foreign countries to dump e-waste in the country.

Some of the solutions suggested include requiring manufacturers taking back products that have run their lives and a shift in processing of e-waste from the informal sector to organised disposal units where the workers are given proper protective gear, working conditions and regular health check-ups.

The article and all photos were first published in Mongabay India, an environmental science and conservation news service, and has been republished with changes in the headline alone. The original article can be read here

WE WANT TO THANK YOU
for reading Citizen Matters, of course. It would be fantastic to be able to thank you for supporting us as well. For 12 years we have strived to bring you trustworthy and useful information about our cities. Because informed citizens are crucial to make a better city. Support Citizen Matters today.

Get the Citizen Matters newsletterSubscribe

Delhi: Crores allocated, but winter smog from stubble burning likely this year too