Last month, government bus drivers in Tamil Nadu struck work for over a week, throwing the cities’ commute scenario into chaos. The issue: long-standing demands over a wage hike. The bus drivers in the state have been demanding pay scales in compliance with the 7th Central Pay Commission (CPC) recommendations, approved by the central government in June 2016.

Currently, in Chennai Metropolitan Transport Corporation (MTC), the basic salary of permanent drivers starts from Rs 17,700. This is according to a settlement that the MTC reached with some trade unions on January 4th. However, major trade unions including the DMK-backed Labour Progressive Federation (LPF) protested this, saying they had not been included in the settlement process at all.

LPF Secretary M Shanmugam says that the strike was mainly over compensation. “As per the 7th CPC recommendations, existing salaries had to be multiplied by a factor of 2.57, but for MTC employees the factor used was 2.44. Vehicle drivers under other transport corporations are going to get basic pay starting from Rs 19,500, while MTC bus drivers will get Rs 17,700 only.”

The issue currently lies with the Madras High Court, which has ordered the state government to appoint a judge as the arbitrator to resolve the issue.

However, not just Chennai, several cities in the country have, from time to time, been paralysed by strikes of workers in the respective transport corporation unions, more often than not over the issue of wages. Examples from the recent past would be Maharashtra and Gujarat State Road Transport Corporations that struck work last November and March respectively. Karnataka and Bengaluru transport corporation drivers also went on strike in July 2016, and the list could go on if we go further back in time.

So, how much are drivers in various transport corporations getting paid? As we constantly harp on the urgency of decongesting our city roads through increased use of public transport, it makes sense to explore what is making one of the key facilitators of an improved urban public transport system — the bus drivers — such a disgruntled lot.

While the basic pay of MTC drivers starts from Rs 17,700, it can go up to a maximum of Rs 1,00,200, as per the current pay scale. There are six levels of drivers in MTC; on being promoted to level six, drivers become driving instructors. It’s only at level six that they can get the highest basic of around Rs 1 lakh.

A senior officer in MTC’s accounts department says, on condition of anonymity, that very few drivers reach this level. “A driver gets promoted to level six only after an approximate 32 years of service. But MTC has been inducting drivers aged around 30 years only, based on seniority in pending lists. So 90% of drivers cannot reach level six by the time they retire.”

In addition to basic pay, drivers get DA of 5% on basic pay. HRA ranges from Rs 1300-8300, and CCA (City Compensatory Allowance) ranges from Rs 360-1200, depending on which level the driver is in. All drivers get a fixed health allowance of Rs 300 per month as well.

Drivers get an annual increment of 3% on their basic pay. They can get promoted a maximum of five times (corresponding to the six levels mentioned earlier). In the first three promotions, they get a hike of 5% each over their basic pay – these occur within the first 21 years of service. And in the last two promotions, they get 3% hike each on basic pay – these happen within 32 years of service.

Among major metros, Delhi Transport Corporation (DTC), which has implemented the 7th CPC, pays bus drivers the most. The basic salary of DTC drivers starts from Rs 21,700, which is Rs 4000 more than what MTC drivers get.

This means, starting salary of a DTC employee is over Rs 28,100. DTC drivers also get annual increment of 3% on basic pay. 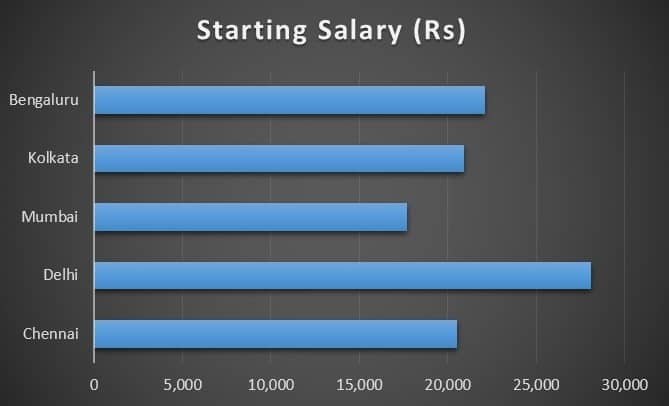 Bus drivers in Mumbai are among the least paid. Basic salary of drivers at BEST (Brihanmumbai Electricity Supply and Transport) Undertaking ranges from Rs 6305 to Rs 15785, says Shankar Nair, Personnel Manager at BEST.

Their basic salary increases by Rs 125 per year, in the first three years of service. Then it increases by Rs 135 per year, for the next three years, and so on. The maximum annual increment they can get, towards the end of service, is Rs 255. Once a driver’s basic pay reaches the maximum of Rs 15,785, he will continue to get annual increment of Rs 255 till he retires.

Drivers also get two promotions in their career, during which they will get twice the annual increment added to their basic pay. For example, if a driver’s increment during the year of promotion is Rs 200, Rs 600 (Rs 200 plus Rs 400) will be added to his basic pay that year. The first promotion will occur within a maximum of 12 years of service.

Nair says the current pay scale is as per the settlement reached in 2012, and that BEST is unlikely to review salaries soon because of its poor financial position. 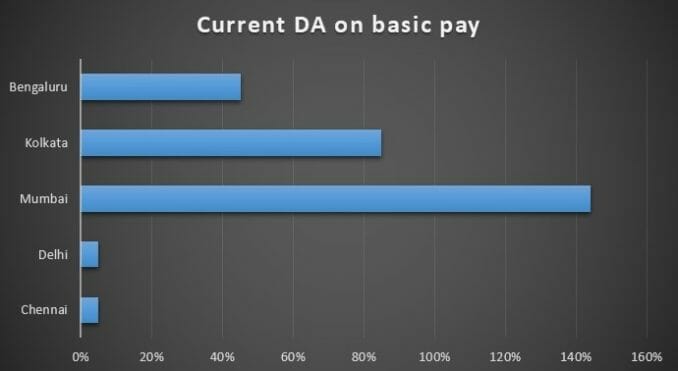 Additionally, they get 85% DA and 15% HRA on basic, and Rs 300 as medical allowance. Including all components, the starting salary of CSTC drivers is Rs 20,900.

CSTC drivers also get annual increment of 3% on basic pay. Though Rs 37,600 is mentioned as the highest in their pay band (Pay Band 3), they can move up into Pay Band 4 and 5 as well, depending on seniority. In such cases, their pay in pay band will be that of employees in higher designations, but their grade pay will remain the same.

While Mumbai drivers’ starting salary is the least among all cities, their salary could be comparable or more than that of Bengaluru drivers later on, because of the high DA they get. In sum, drivers’ pay is the highest in Delhi. Considering starting salaries, Delhi leads, followed by Bengaluru and Kolkata. Chennai is fourth, followed by Mumbai.

About Navya P K 30 Articles
Navya has 12 years of experience in journalism, covering development, urban governance and environment. She was earlier Senior Journalist, Citizen Matters, and Reporter, The New Indian Express. She has also freelanced for publications such as The News Minute, Factor Daily and India Together. Navya won the All India Environment Journalism Award, 2013, for her investigative series on the environmental violations of an upcoming SEZ in Bengaluru, published in Citizen Matters. She also won the PII-UNICEF fellowship in 2016 to report on child rights in Kerala and Tamil Nadu. Navya has an MA in Political Studies from Jawaharlal Nehru University, and a PG Diploma from the Asian College of Journalism.

The Gauhati (Guwahati) parliamentary seat will have a media personality, businesswoman and a supreme court lawyer facing off in the elections on Thursday. Know more about the candidates to make an informed choice.

Why is IIT Kharagpur training driving instructors from Kolkata and around?

Close to 450 driving school trainers from Kolkata and other districts have been trained under a programme piloted by the premier institute under the ‘Safe Drive Save Life’ campaign of the state government. The mission: to promote a culture of safe driving by training the trainer.

Park your car in front of your home and pay. Pay more during peak hours, and many other rules. Some decry it as plain unfair, others feel it’s the only solution to traffic and pollution. Ironically, many Delhiites are not even aware that this is in force!