Farida Sheikh remembers her house in the slums in Ahmedabad feeling like a furnace, where summer temperatures have reached up to 50 degrees Celsius. But for the last four years, the situation inside the house has cooled down.

Protected from the scorching heat, Sheikh said that related health issues have reduced, the children can study and the family can operate their home-run kite-making business in safe conditions.

The house in the heat-stressed western Indian city is one amongst hundreds that has improved its climate resilience with the help of an NGO – Mahila Housing Sewa Trust (MHT).

The non-profit, with its 25 years in the field empowering women from marginalised communities and resolving housing issues, pitched in to help slums adapt to climate change pressures. With approximately USD 1.2 million support from the Global Resilience Partnership from 2015, they expanded their climate resilience programme to reach 100 slums across eight Indian cities, one in Nepal and another in Bangladesh.

“We focus on four stresses that are prevalent in a majority of the slums – heat stress, floods, vector-borne diseases, and water scarcity,” said Siraz Hirani, senior program manager at MHT. 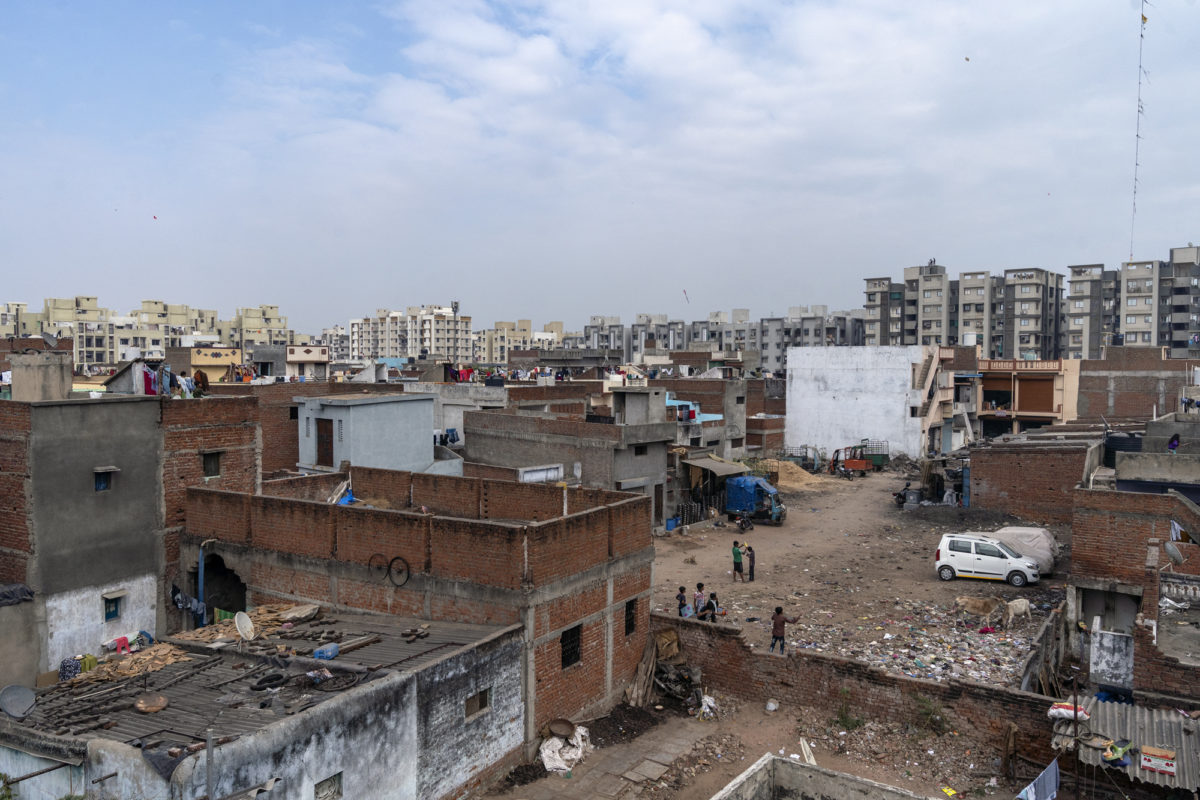 Vishwas Nagar slums in Ahmedabad, Gujarat. People in slum settlements are more vulnerable to rising climate change impacts such as heat stress and floods in cities. Photo by Kartik Chandramouli/Mongabay.

In 2019, India faced its longest heatwave in three decades, and the year also concluded a decade of exceptional global heat and high-impact weather due to climate change. And as the population in urban centers becomes denser, climate change impacts such as heatwaves, water scarcity, and floods could make the standard of living in cities fall drastically, especially for the poor.

Priya Dutta, senior research associate at the Indian Institute of Public Health (IIPH), Gandhinagar, said that concretisation and lack of green spaces contribute to heat-trapping in cities. “Women, the elderly and children are most vulnerable to extreme heat,” she said.

Apart from spreading awareness about extreme heat amongst women in slum settlements, MHT’s co-operative credit schemes make solutions such as ModRoofs accessible to them. With the help of a loan for ModRoofs generally between USD 1,100 to USD 1,400, families upgrade their houses to cope with the summers.

The social enterprise branches out from facilitating the installment of cooling roofs or cheaper alternatives such as sun reflective white paint, to also include early warning systems for heat as well as floods, water quality testing, and cleanliness drives among other initiatives.

All these solutions are all women-led. MHT organizes women from informal and formal slum settlements into Community Action Groups (CAG) for all of its programmes. They then proceed to train and equip leaders or Vikasinis. 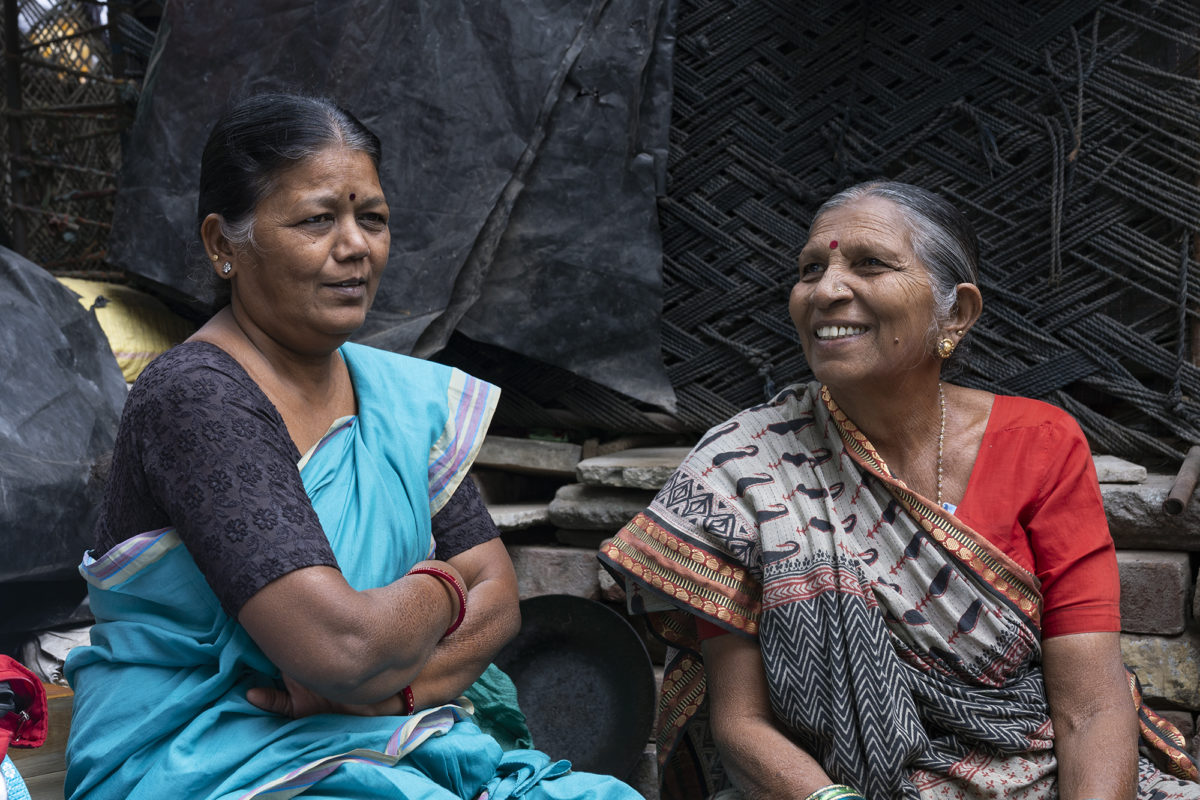 Krishnaben (left) and Jeeviben (right) are Vikasinis or women leaders from the slums of Ahmedabad who actively participate in resolving local development issues and help build climate resilience. Photo by Kartik Chandramouli/Mongabay.

“Our Vikasinis participate in stakeholder meetings with local authorities, institutes, and other society members to discuss local issues,” said Bijal Brahmbhatt, director of MHT, which won at the 2019 United Nations Global Climate Action Awards at COP25. “They all know the right authority and the officials to approach to resolve matters.”

Some of these women are also educated about climate change and its impact on their lives, and made aware of the solutions available. These Climate Saathis (partners) then advocate the solutions to other women in the community. MHT has trained 13,781 Climate Saathis to date across the regions they are present in.

Consultations with the non-profit and the Vikasinis were used to build the cool roof programme under the Ahmedabad Heat Action Plan, a guide to extreme heat planning in the city, that has been found to have avoided an estimated 2,380 heat-related deaths after implementation. The plan was developed in 2013 by the Ahmedabad Municipal Corporation, along with partners such as IIPH-Gandhinagar, after the city experienced one of its worst heatwaves in 2010, with 1,344 deaths.

Some of the women associated with MHT are trained energy auditors who go door-to-door advising on making homes energy-efficient. Using a wattmeter to demonstrate the energy consumption of owned devices and explaining how costs can be saved in the long run with energy-saving products, people shed their reluctance to buy new and more expensive appliances. By connecting people to the right vendors, the auditors have helped over 30,000 households purchase energy-saving products and also earn a livelihood through commissions. 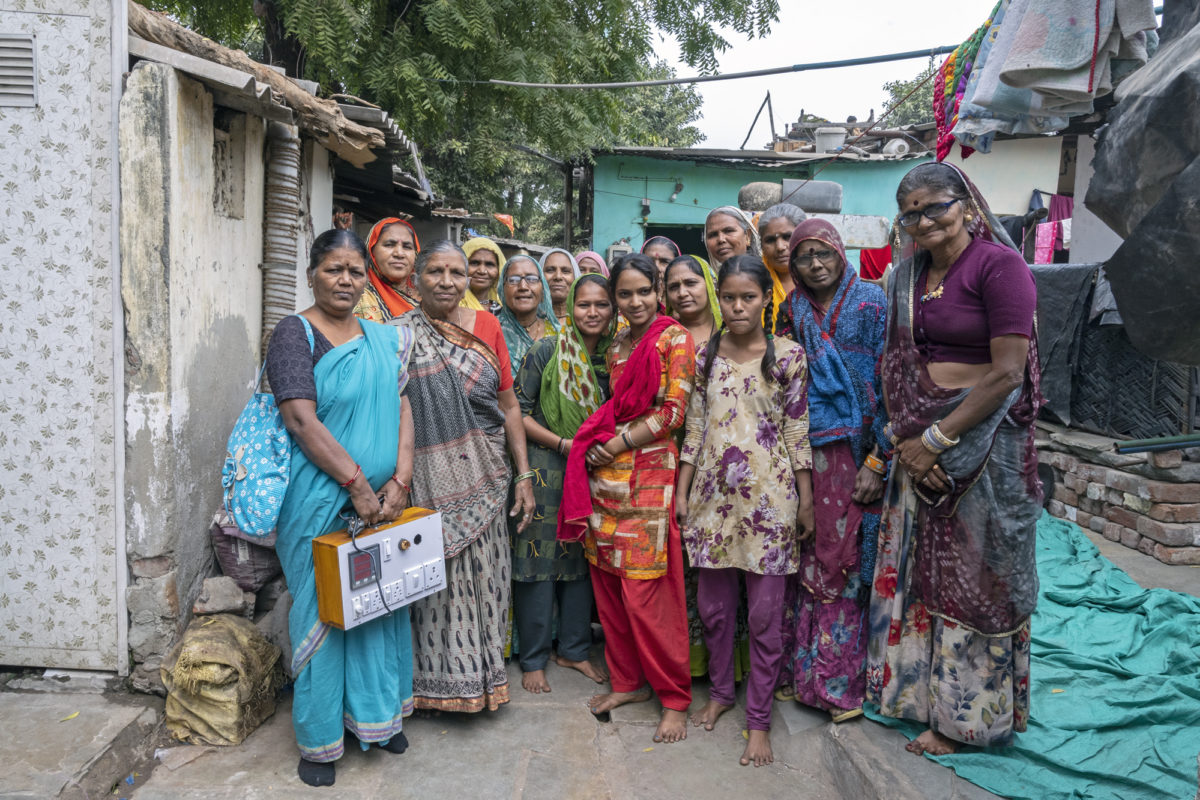 Krishnaben (left), an energy auditor and one of the 13,781 Climate Saathis trained by Mahila Housing Sewa Trust, with the women from Khodiyarnagar slums after a meeting. Photo by Kartik Chandramouli/Mongabay.

Krishnaben, one of the Climate Saathis and energy auditor, told Mongabay-India that she faced resistance from her spouse during her initial phases of association with the NGO in 1999. “Now, it feels good to step out and earn money, meet your sisters, educate them and give them the ability to make decisions as well,” she said on the way to a meeting with women of Khodiyarnagar slums.

In one of the one-room houses, Krishnaben explained a far more nuanced issue in front of a home shrine – its lights are almost never switched off. Surrounded by women, she uses the wattmeter to display a low energy consuming bulb that can be used instead to save energy and costs.

Hirani admits that such audits are needed in larger urban households since energy consumption is directly related to climate change. But both, Hirani and Krishnaben, said that the ability to save money in low-income families and sensitising the communities regarding the issue is a good way to bring about change. 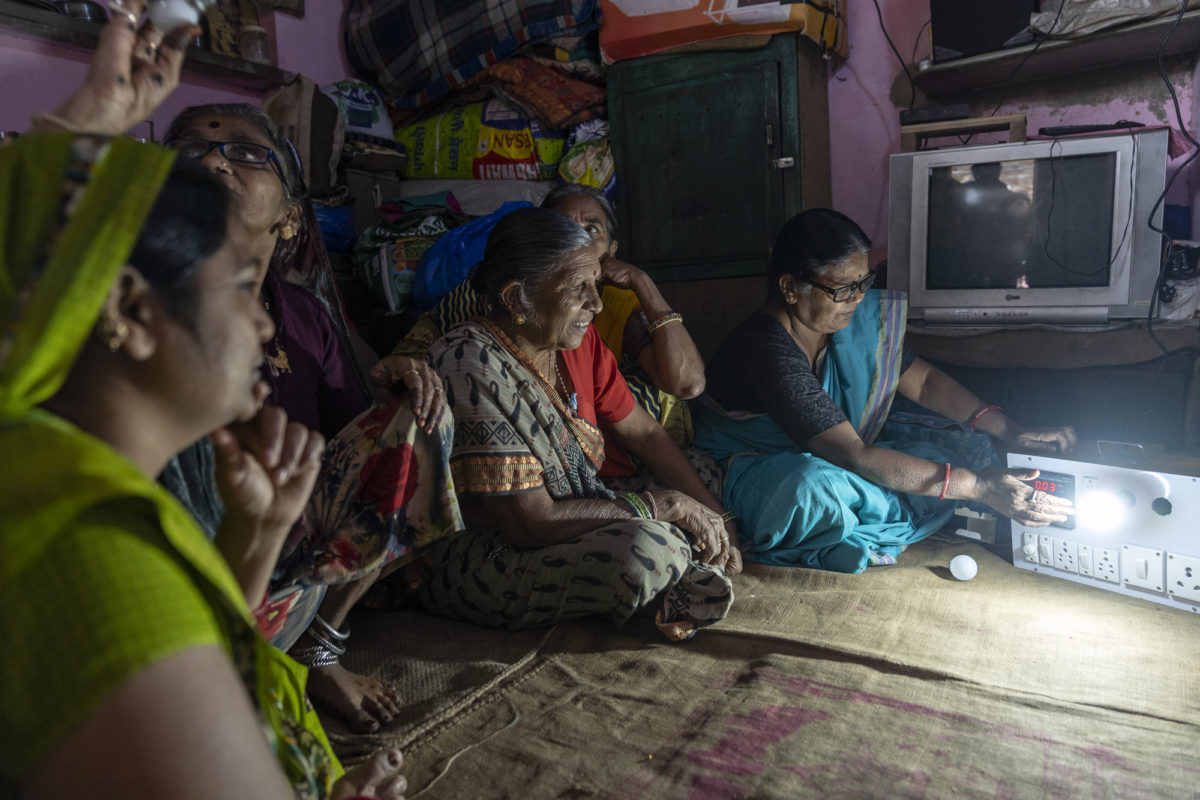 Krishnaben (in blue), a trained energy auditor and Climate Saathi, demonstrates the energy-efficiency of a bulb in one of the houses in a slum in Ahmedabad. Photo by Kartik Chandramouli/Mongabay.

Chandni Singh, a researcher at the Indian Institute for Human Settlements, who is not associated with MHT, said that the livelihood aspect of the Climate Saathis programme can help increase adaptive capacities of slums and also bring positive changes in gender dynamics within households and communities.

A recent paper about how gender and household relationships shape climate change impacts and responses in semi-arid Africa and Asia notes that “improved agency and decision-making abilities have not necessarily improved women’s wellbeing. One finds significant trade-offs between women’s work, health, and their aspirations for their children”. Singh, a co-author of the study, explained that while providing livelihoods empower women, sometimes they can also have the risk of increasing the existing work burden. “Instead of us supposing what is good and bad for people, it is important to ask the women themselves on how their lives have changed.” 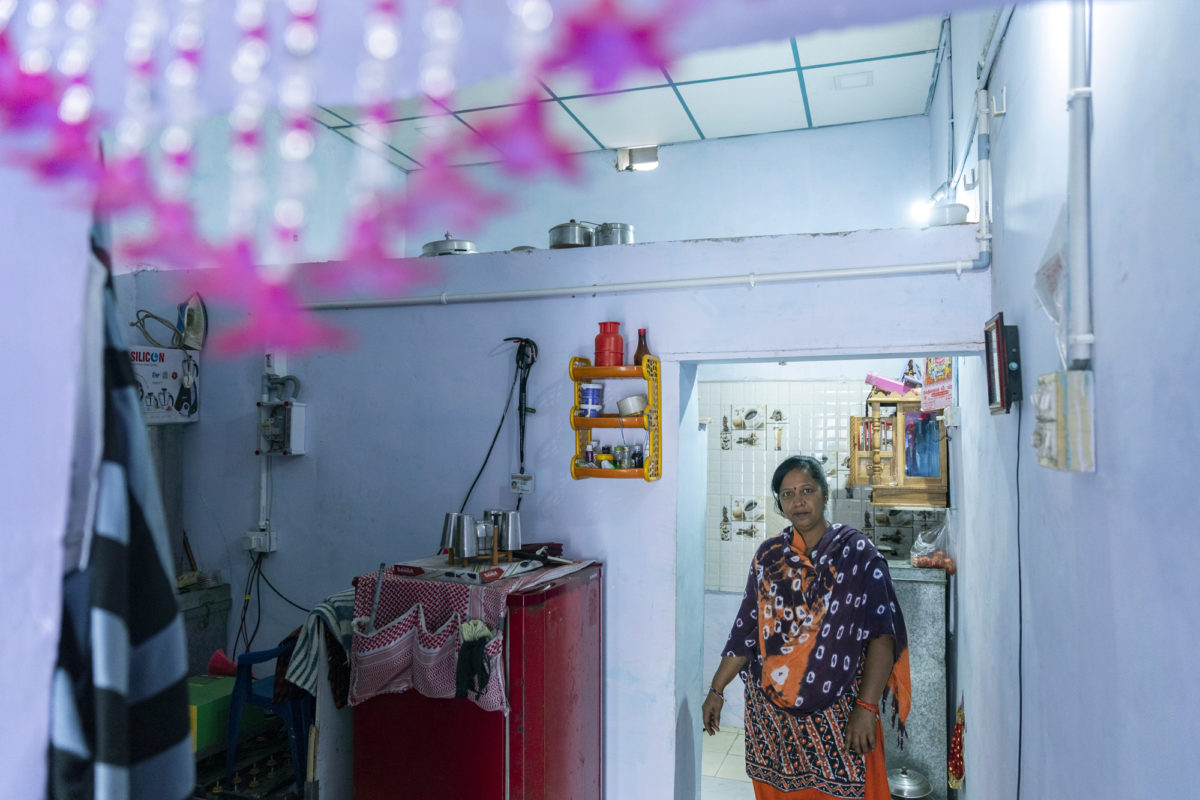 Meenaben’s house in Vishwas Nagar slums has been upgraded with energy-efficient products and made heat resilient with the help of a cooling roof. She purchased these with the help of a loan from Mahila Housing Trust’s co-operative credit scheme. Photo by Kartik Chandramouli/Mongabay.

Roughly 15 kilometers away from Krishnaben’s meeting with women, Meenaben’s house in Vishwas Nagar slums has been transformed from a heat box to a well-ventilated, energy-efficient home where she now runs a government-approved child daycare center. The ceiling is a ModRoof adapted to fit four energy-efficient LED bulbs, the roof has solar panels and the walls are decorated with colorful charts. Meenaben proudly said that she saves around USD 4.5 per month on her electricity bill.

Her neighbours and relatives from another colony are planning to bring some of these changes to their homes too, making the city resilient, one house at a time.

[This story was first published on Mongabay. It has been republished with permission. The original article can be found here.]

About Kartik Chandramouli/Mongabay 2 Articles
The author has not yet added any personal or biographical info to her or his author profile.

Dear Prime Minister, do not use pakoda sellers as your excuse!

In the wake of the controversy over Prime Minister Narendra Modi’s reference to the street pakoda seller as an employment statistic, the author takes up the cause of street vendors across the nation and voices their real concerns.

6.48 lakh houses remained unsold across India’s top seven cities in 2019, and Mumbai alone accounted for nearly a third of these. Yet scarcity of affordable housing pushes people further and further away from the city. What could explain this?

Future of jobs: Have you heard of redistributed retirement?

COVID has created considerable uncertainty around employment opportunities. You may have to visualize different future paths for your career, and upskill yourself. And be prepared for bouts of retirement in between.