While grown-ups are busy figuring out the logistics of COP25 in Madrid, given that Chile is not an option anymore, student strikers in India are busy organising mass movements across their cities.

Students from across the city of Mumbai have been striking every Friday at Marine Drive, a promenade in South Mumbai where currently, the 37th week of the protest is underway.

Tanmay Shinde, 23, a student striker from the city noted that his motivations to join the movement arose from observing the “ample environmental issues in the city itself” like flooding during monsoons, water shortages, air pollution and environmentally destructive activities like the slaughtering of forests, mangroves and wetlands. He also added that personally, the peaceful mode of climate protests appealed to him.

“This is the first movement that I am taking part in and my inspiration is Greta Thunberg’s speech at the UN,” Freya G Nair, 12, a student striker from Bangalore said. “I saw that someone who is around my age can make an impact on the planet.”

Bangalore too has its share of grave environmental concerns that are evident in its inefficient waste disposal mechanisms, lakes that frequently froth and burn, heavy vehicular traffic and the large-scale presence of industrial hubs that cause air pollution, etc.

Freya was one of the students who organised a protest on 15th November, 2019 outside a software technology park in Bangalore called Manyata Tech Park, to draw attention to the levels of noise and air pollution around the area.

“My friends and I share climate protest posters on our stories [on Instagram] and this helps to spread awareness among our circles,” she said, adding that on the actual day of the protests, she has noticed that her friends bring a lot of their friends and acquaintances from different schools and colleges across the city.

Aditya Dubey, a 16-year-old environmental activist from the city of Delhi said that earlier this year, he and a group of friends were successful in stopping a few Burger King outlets in India from using plastic. “This began with us tweeting to Burger King,” he said. Recently, he has also filed a lawsuit against Amazon and Flipkart for “excessive usage of plastic in the packaging of their goods.”

Aditya explained that when Burger King stopped responding to strikers on Twitter, they called for a protest on 26th September, 2019 outside one of their major joints in Delhi. “A few days before the protest, we had a talk with the outlet’s chief operations support officer and he promised us that they would soon stop using plastic and they actually did,” he said.

The call to stop using plastic also reached Burger King outlets in other cities like Ludhiana in the northern state of Punjab where the store has stopped using plastic straws.

“We have been tweeting to these companies with #ServeFoodNotPlastic,” he said, noting that “social media is the main tool” for student strikers like him in India who, he said, are increasingly realising that climate change in the country is clearly visible but that “the government government is not doing anything about this and some companies are in fact contributing to the crisis.”

All of these mobilisations come at the heels of the Climate Week protests in the country between 20th and 27th September when more than 1,73,000 children and adults joined over 7 million strikers from around the world from over 91 cities, towns and villages in India from Delhi, Bulandshahr, Kolkata, Varanasi, Bangalore, Patna, Pune, Bhubaneshwar, Kochi, Mumbai, Bhatinda, to name a few – to call on leaders for definitive action on climate change.

In organising the Climate Week protests too, posters were made and shared by the student strikers on various social media platforms. 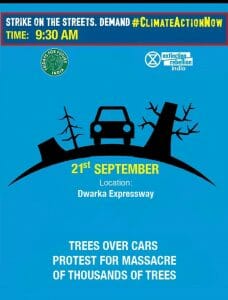 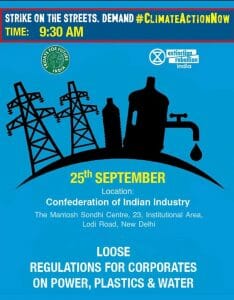 There are indisputably certain challenges in translating social media activism into on-the-ground impact. However, here is a clear example of how social media can play an important role as a facilitator – primarily by providing logistical support via mobilisations. It is working smoothly in line with the street protests that seek to raise awareness and are demanding concrete political action.

From relatively unknown operators to high profile firms, travel agents have been known to bungle or even cheat customers outright. These cases, from Mysore to Kolkata, will tell you what to look out for.

Our child was terrified of COVID. This is how we soothed him

The fear and anxiety that prevails all around today has serious implications for the psycho-social health of small children and adolescents too. A father of two narrates his experience.

Can the ban on construction really improve Delhi’s air quality?

The Delhi government has issued fresh guidelines to check pollution caused by dust from these sites. Is the ban on construction still needed?