ADR has analysed the self-sworn affidavits of 967 out of 979 candidates, who are contesting in the sixth phase of the ongoing general elections, scheduled for May 12th. Topping the list of crorepatis is Jyotiraditya M. Scindia fighting from Guna constituency of Madhya Pradesh with a Congress ticket. He possesses assets worth Rs 374 crore.

Second on the list is Gautam Gambhir with assets over Rs 147 crore. The former national-level cricketer also has the highest liabilities (among Phase 6 candidates) of over Rs 34 crore and highest annual income of over Rs 12 crore for financial year 2017-18 as declared in the Income Tax Returns. 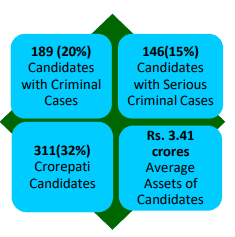 Why 3.5 lakh doctors in the country are planning to strike work this Monday

Following an assault on junior doctors at a prominent state run hospital in Kolkata, doctors across the country have united in support and joined their protest. But what led to the current situation and why are doctors in Kolkata unwilling to budge from their stand?

The new guidelines issued by the Food Safety and Standards Authority of India places a mandate on packaged food companies to label high fat, high sugar and high salt content on the front of the package, using a traffic light signalling system.