“I have cleared my house of all the plastic bags. I cannot afford to pay Rs 5,000 as fine.”

“Everyone on the road is carrying cloth bags today. Who wants to pay fine? ”

“Vegetable vendors are telling us to go home and bring a bag. None of them have plastic bags.”

“Will it be alright to carry this water bottle? I won’t be caught and fined, right?”

The Maharashtra Plastic and Thermocol Products (Manufacture, Usage, Sale, Transport, Handling and Storage) Notification, 2018 that imposes a ban on several disposable items (with effect from 23rd June 2018) would appear extreme, but citizens in general seem to be quite serious about following the rules. Unlike earlier times, consumers are being held liable for abuse of plastic/disposables, and the penalties for non-compliance are steep.

In Kandivali where I live, when Brihanmumbai Municipal Corporation (BMC) inspectors periodically did the rounds to catch violators, vendors would quickly hide their plastic bags. Those not so quick would get fined Rs 500 or so, but as soon as the officers went out of sight, the bags would resurface. Those who were slightly law-abiding did not use carry bags, but they’d accede to customers’ requests and give them ‘kirana’ bags (plastic bags without handles), totally defeating the purpose of the ban.

Plastic carry bags apart, there has been indiscriminate use of disposable items at restaurants, food courts, roadside eateries and home parties. Some of us tried to educate the vendors and people about the problems associated with disposable plastic and thermocol items, but most often we would be told that as long as these are available, they would be used.

Like us, there have been several groups of people in different areas of Mumbai working in their own way to achieve reduced use of plastic. The Zero Plastic Bag campaign in Vile Parle, initiated by Brihanmumbai Municipal Corporation (BMC) officer Mr Subash Dalvi way back in 2010, was one of the few successful efforts in Mumbai, achieved through persistence and education through the “BMC system”, but failed to get replicated in most of the city.

With pressure on the environment and the solid waste management system, it seems that the Maharashtra government had no choice but to authorise regulations for manufacture, usage, sale, storage and transport of products made from plastic and thermocol (which generates non-biodegradable waste), through the 2018 notification.

The notification gives detailed observations that lead to the ban, and anyone who reads it would realise that the government has made a sincere effort to correct the lapses of the past.

Concerns about usage and disposal of plastic are diverse and include accumulation of waste in landfills, water bodies and in natural habitats, physical problems for wild animals resulting from ingestion or entanglement in plastic, the leaching of chemicals from plastic products and the potential for plastics to transfer chemicals to wildlife and humans are increasing.

Because of non-biodegradable plastic waste handling of municipal solid waste becomes difficult and incurs more financial burden and also due to burning such waste in open environment causes various diseases in humans and animals.

It is observed that non-biodegradable garbage is responsible for clogging drains and nallas causing flood in urban settlement leading to loss of lives and damage to properties and infrastructure.

Plastic waste and micro plastic cause danger to marine and freshwater bio-diversity and also hamper ecosystem services due to spreading of such waste in and around ecosystems, on tourists places, beaches and on agriculture and forest areas.

Non-biodegradable plastic waste and micro plastic are having negative impacts on fish diversity and fisheries activity.

Detailed stake-holders consultations and deliberations with the field level officials were undertaken, and public notices were also published in leading newspapers.

Despite the ban on plastic bags of less than 50 micron through Maharashtra Plastic Carry Bags (Manufacture and Usage) Rules, 2006, there is increase in the non-biodegradable plastic garbage waste causing damage to environment and health.

What is the ban about?

What are the items that are banned?

What are the items that are exempt from the ban?

What will happen if you are found with any banned item in Mumbai?

Who is authorised to fine you in Mumbai?

What can Mumbaikars do with the banned items? 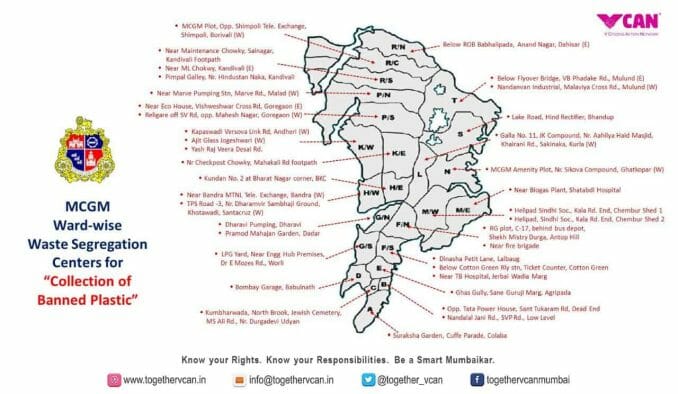 Impact of the plastic ban

According to a recent UNDP report single-use plastic comprises 89% of the plastic in the ocean. Given this, a state like Maharashtra (that generates 1,200 tonnes of plastic waste everyday), could significantly cut down on its plastic waste, making it easier to manage, and addressing most of the concerns raised in the notification.

Within a day of the ban coming into force, there are visible changes in home delivery in the apartment complex where I live. Groceries are brought in plastic baskets instead of plastic carry bags. The milk man carries his big can instead of pre-filling into plastic bags. The prospect of stiff fines have achieved what years of coaxing (to let go of plastic bags) could not.

If not plastic, what?

Alternatives to plastic/thermocol disposables have gained in popularity and new ones are likely to emerge. However, we need to tread carefully, lest we get swamped with new problems.

We are fortunate that the notification had the foresight to include non-woven polypropylene bags that are widely used as an alternative to plastic. In places like Chandigarh, where plastic has been banned for several years, people treat the non-woven bags just like plastic and one can see these littering the streets. There are many in Mumbai using non-woven bags thinking they are “cloth” bags. In the days to come they will get to know that these are in the banned list.

Many vendors have switched from plastic bags to bags that say “I am not a plastic bag”. These bags are different from plastic in that they are either not made from petroleum (and are compostable under certain conditions) and/or they contain certain additives that make them decompose unlike normal plastic bags. However, experiments I have carried out have shown that unlike food waste, these bags take years to turn into compost in normal compost bins, and are likely to pose challenges similar to plastic (they cause suffocation like plastic bags and will block drains and they’ll stick on trees like balloons; not sure what happens when they enter the stomach of a cow). Electrically operated composting machines in residential societies cannot handle them.

So being more-or-less single use, not recyclable, and hard  to compost, they’ll need to be thrown out. They may get mistaken for plastic, in which case they can ruin plastic recycling.

Other disposable options like paper and areca plates, though better than plastic are still disposable, creating unnecessary rubbish. Handling them in a community composting set up requires extra capacity. Apartment complexes like ours, that do in-house composting would be better off without them.

One really hopes that the firm rules and fines will make people realise the way we’ve exploited our earth, and eventually lead to a reduction in the use of disposables.  One hopes this will take us back to the days of the 1970s and 80s when we didn’t mind spending a bit of time sorting our vegetables and reusing our jam jars. Citizens can make it happen!

[The article was first published by the author on her personal blog, and has been republished with permission.]

About Arathi Manay Yajaman 3 Articles
Arathi is a market researcher who loves to run and write. She has been actively involved in issues that affect citizens, including apartment management, waste management and lakes. She used to live in Mumbai and is now based in Bengaluru, working as a Community Anchor with Citizen Matters.
Website Facebook Instagram Twitter YouTube LinkedIn

Miyawaki afforestation catching on in Indian cities, but can it sustain?

“Hear us today, for life tomorrow”: Pleas against Bandhwari Waste to Energy Plant

Both citizens and experts are staunchly opposed to the proposed expansion of the Bandhwari Waste to Energy plant. Here’s why.

Rain, chill or heatwave, homeless poor have few places to turn to

Even though the National Urban Livelihoods Mission prescribes permanent, 24X7 shelters for the urban homeless, most of our cities can accommodate less than six percent of such population in the official shelter homes.