November 19 is World Toilet Day. India’s massive five-year all-hands-on-deck Clean India Mission to construct latrines for all has just ended. The Government reports that 100 million additional toilets have been constructed via this campaign; these are mostly not connected to waterborne sewer systems. Just over 30% of India’s urban population has access to sewers, though most city plans include elaborate plans for sewerage.

Sewers are supposed to be underground and unseen, and are not supposed to need manual labour to dispose of the waste. But sewers get blocked and have to be unblocked, overflow and have to be cleaned out, break and have to be repaired. Several cities have introduced mechanisation to fix major blockages and to avoid people having to jump into the sewer system when problems arise, but sewer management remains quite a challenge.

The sewers are often densely networked, the pipes are old, the streets are narrow. Water and Sewerage Boards are just overwhelmed with the number of demands and complaints they get on a daily basis, and they can’t be everywhere at once. Deaths of sewer workers in India’s cities continue to occur. Sewers continue to be unblocked with makeshift equipment such as bamboo poles and iron rods; accumulated silt often needs to be cleaned out by hand or shovel. And so human labour, which in this case is inevitably Dalit labour, keeps India’s sewers flowing.

Technically, this is not “manual scavenging”. But what is it, then? On this World Toilet Day, we bring to light the labour of India’s sewer workers – those who do the unclean work that a Clean India relies on. We tell their stories through the voice of Sharada Prasad, who followed the men as they worked.

August 2019. The afternoon in Hyderabad has not been tempered by the rains. I’m walking around, looking for sanitation workers. Narrow streets, dense settlements and old sewer lines are a recipe for sewer blockages. I see them: four men lifting a large slab of concrete to gain access to the drain underneath. The homeowner connected to the drain is with them, too. Once the slab is pried open, all four peer into the hole. 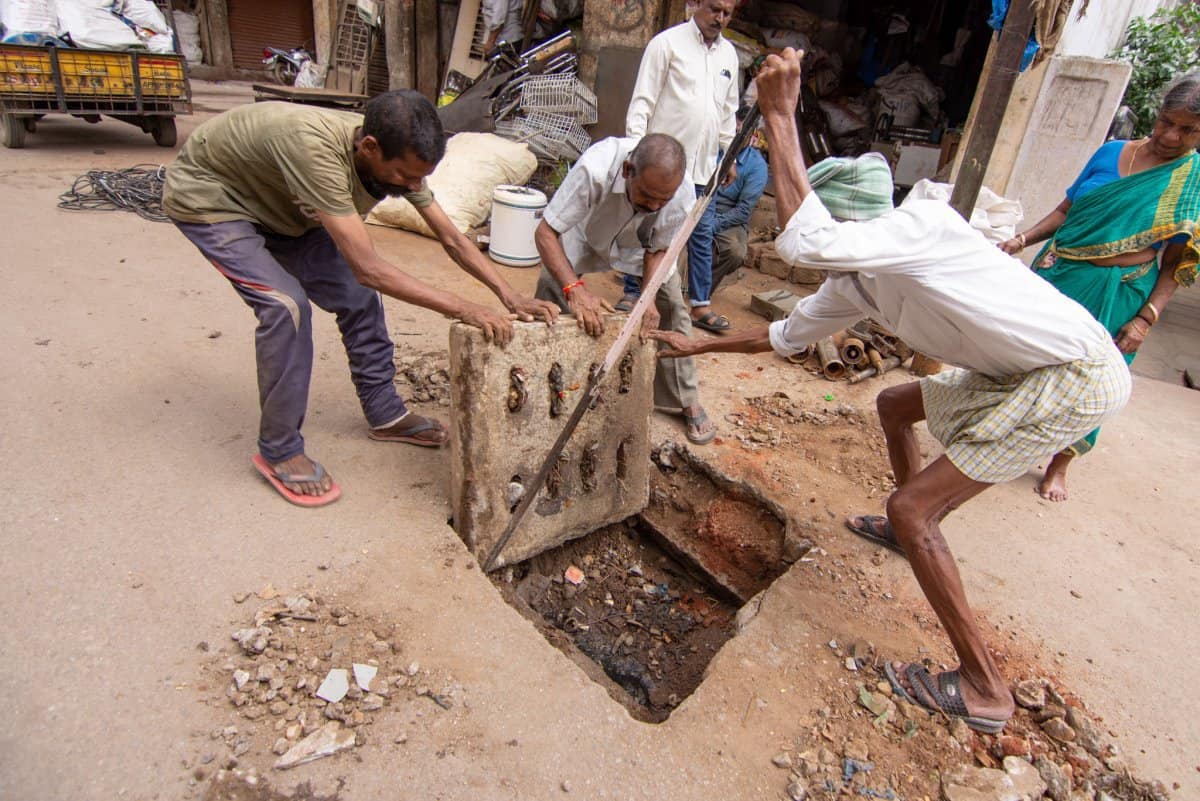 “Does not look like a lot of work” says the homeowner, walking backwards to lean on his motorcycle. “No, it is a lot of work. Look at all the dirt,” responds the man in the nice white shirt. “It is a lot of work. But we will get it done. Don’t worry.” Sriramulu, in the green New York t-shirt, slurs his words a little. The other man, Govindu, says nothing, but looks at the homeowner. The men start scooping out the silt blocking the sewer. 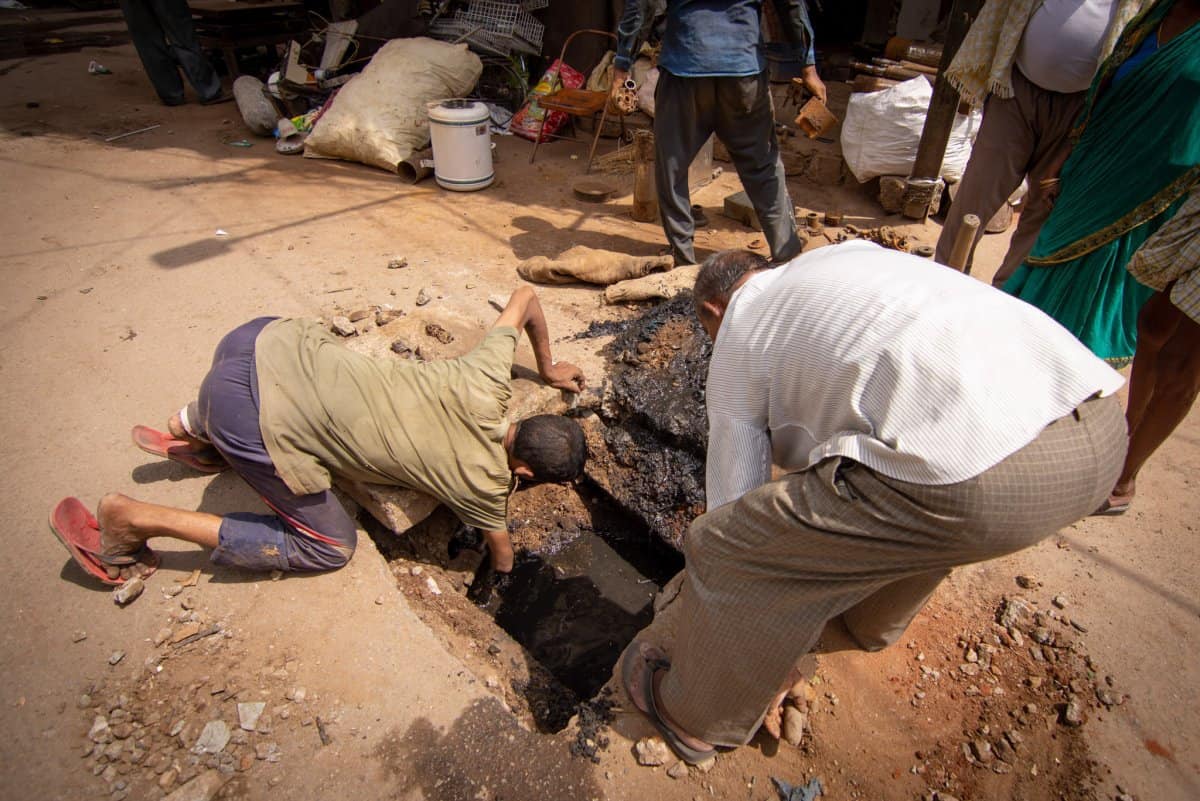 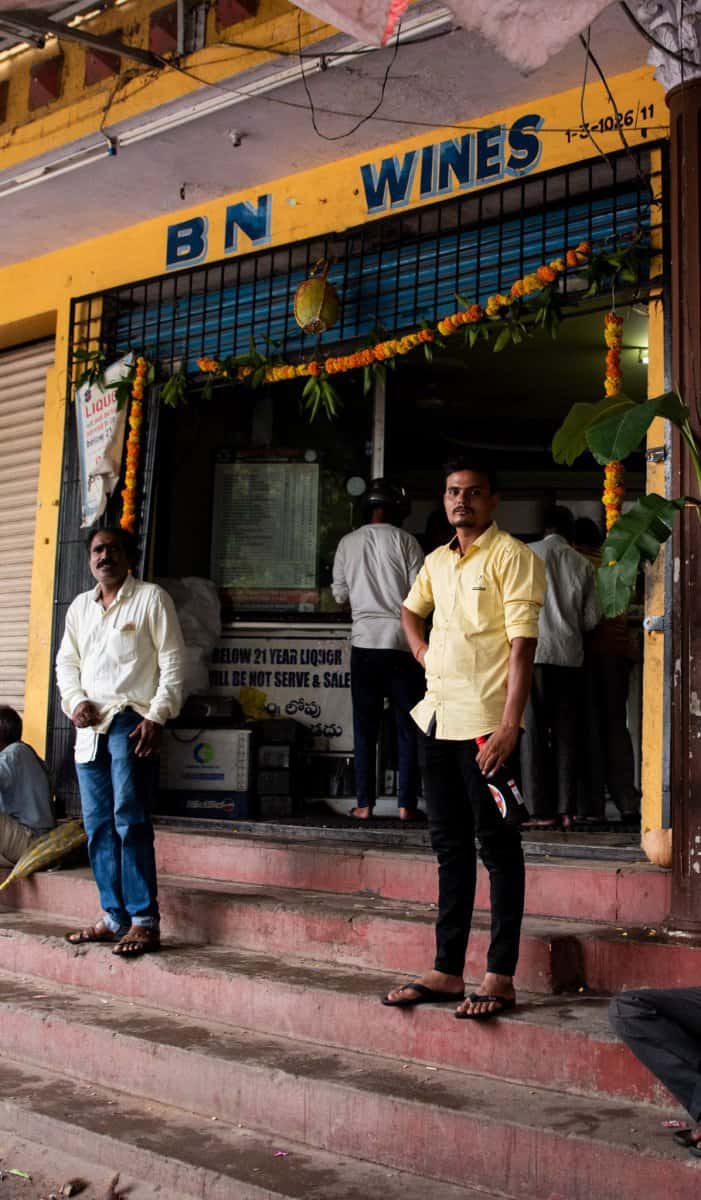 I’m wondering where these men are to be found, and he tells me. “I go to the nearest wine shop. There are people who will do this work just to get the money to drink. That’s how I found this guy.” The carpenter points to Sriramulu, who is now just sitting there. I can’t tell if he’s already drunk, but I can see he is already tired. The carpenter opens a packet of gutkha[1] and pours it into Sriramulu’s hand. 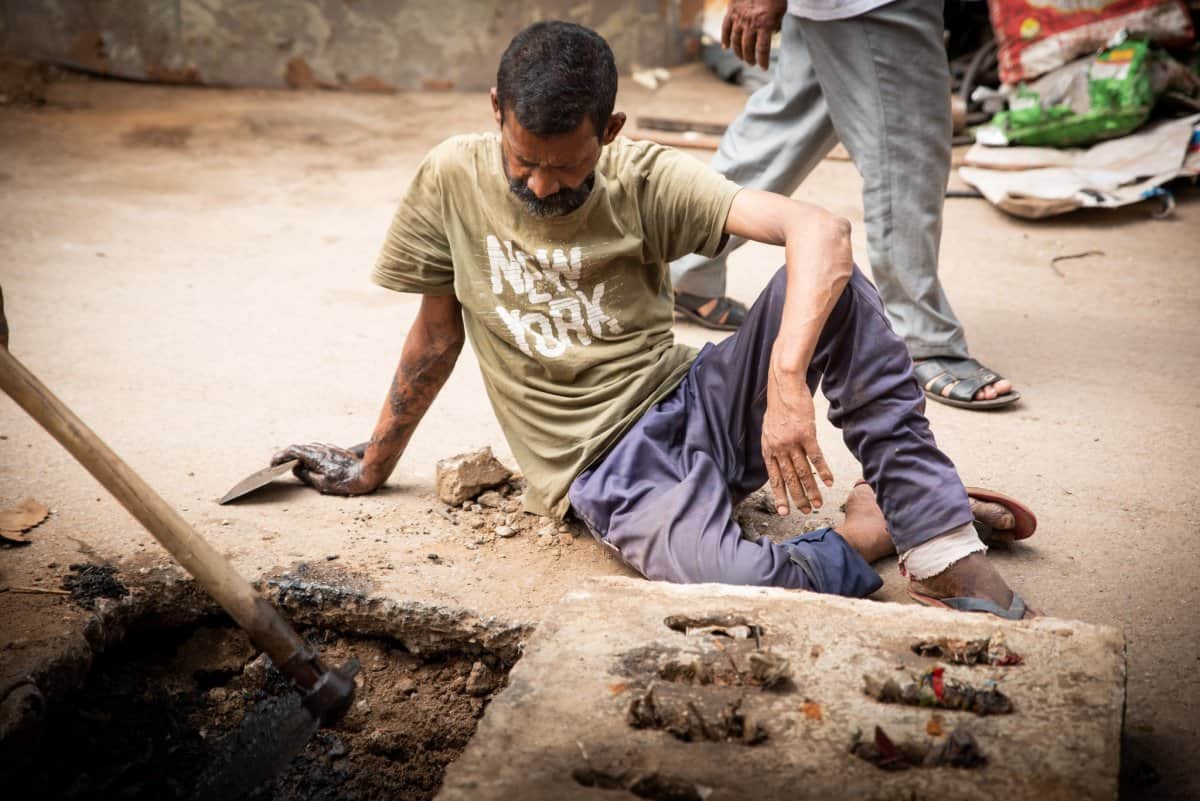 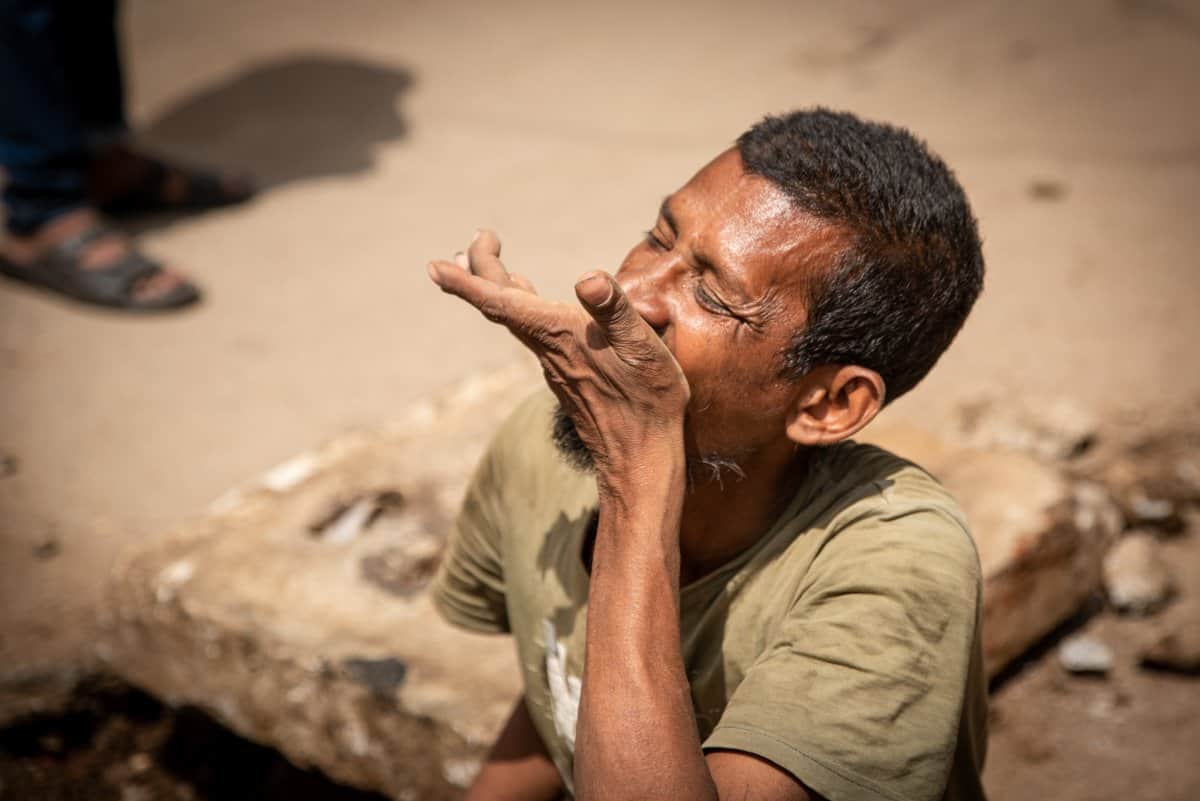 “No,” he says. The homeowner’s toilet is, it seems, illegally connected to the drains, and “the city won’t service such blockages”. Sriramulu speaks: “The drain has a lot of silt, solid like concrete. I need to get a cable to clear the silt and also another guy who is willing to get into the opening.” Drunk or not, Sriramulu is clearly not going to get into that opening.

The carpenter and Sriramulu collect ₹200 from the home owner and leave. In two hours they are back with Narasimhulu, hoisting a coil of cable over his shoulder while trying hard to balance himself. “Same wine shop?” I ask, looking at the wobbly man. “Yes! I bought him a quarter [2] of OC [3] which he chugged in an instant. He’ll follow us around like a dog till he gets the money for his second quarter,” the carpenter assures me. 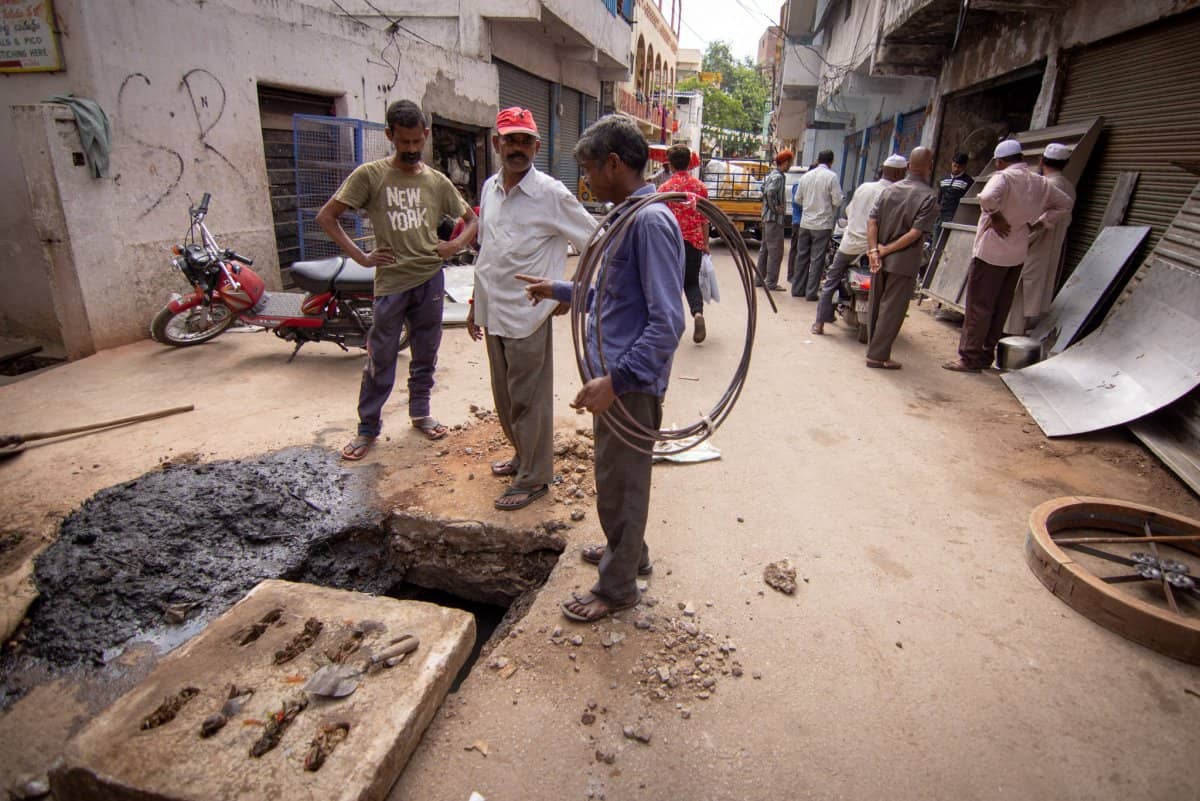 Sriramulu and Govindu peer down the drain and insert the cable through all the rubble. Nothing happens. The silt block is just too hard. “Look, get in and take out all that mud from the drain, the sewage will flow immediately and you can have your money,” the carpenter tells Narasimhulu. Narasimhulu obeys; he strips to his underwear and climbs into the drain. 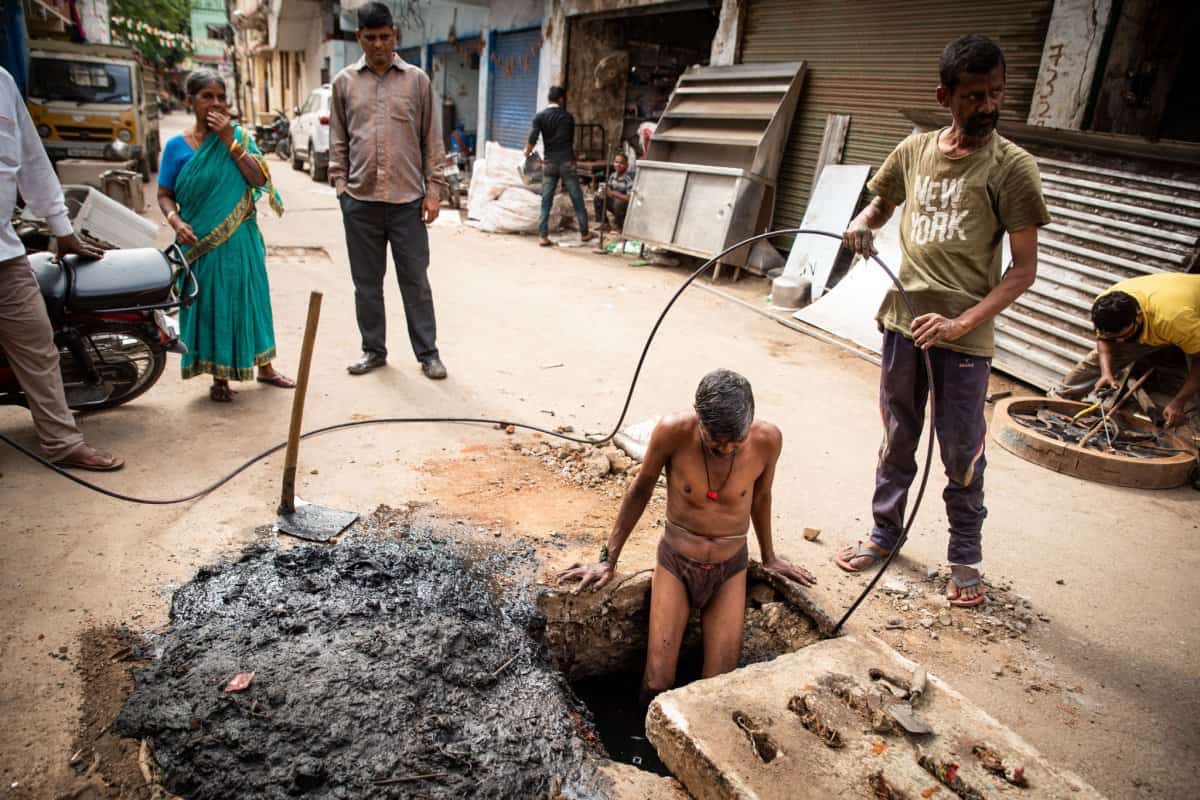 He dips right hand into the mud and sewage, scoops some out, and the water from the homeowner’s blocked toilet starts to flow out slowly. Narasimhulu keeps digging, but then he gets tired. There’s just too much silt. His once-glittering green rakhi is dirty. 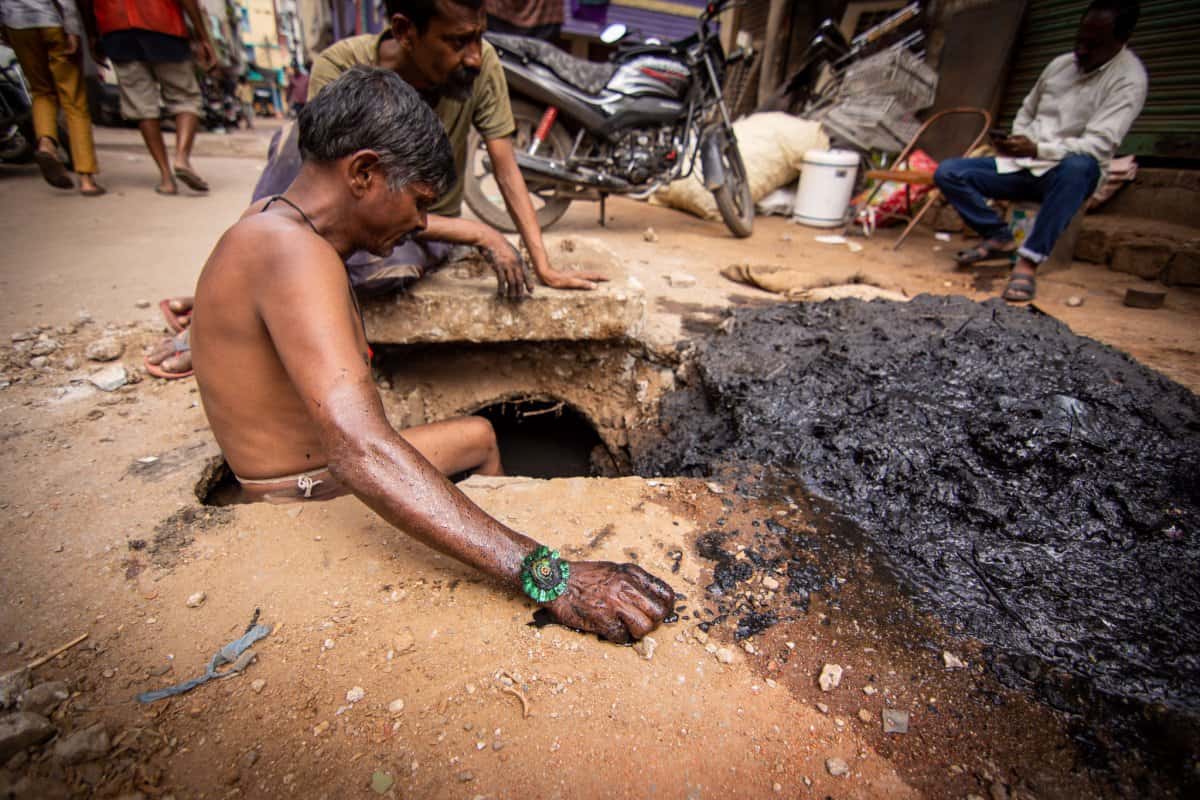 The carpenter tells him and Sriramulu to open up another drain cover, but that drain, too, is full of silt. Sriramulu is done. “I don’t think this work can be done without digging up a part of the street,” he tells the homeowner. “You need to call more workers. In a day or two your toilet will be blocked again.” The men close the drain covers, collect the money from the homeowner, and walk away towards the wine shop.

Venkat Swamy is not too sure of his age, but has been doing sanitation work for 38 years. He started out as a casual labourer, like Sriramulu, but he’s a permanent city employee now. All his fellow sewer workers are Malas or Maadigas (i.e., Dalits). He unblocks sewers on the streets that have been laid by the water board; he also clears pipes that connect household toilets to the street sewers.

The day starts around 9:30 a.m. at the Water Board office where an officer hands Venkat Swamy a chit with the phone numbers of the houses that have registered complaints. He walks for 30 minutes to a compound at the periphery of the neighborhood he services, removes his shirt, folds it and stores it in a nook, loads iron rods, a bucket and other tools on to a bicycle, and rides out into the street. 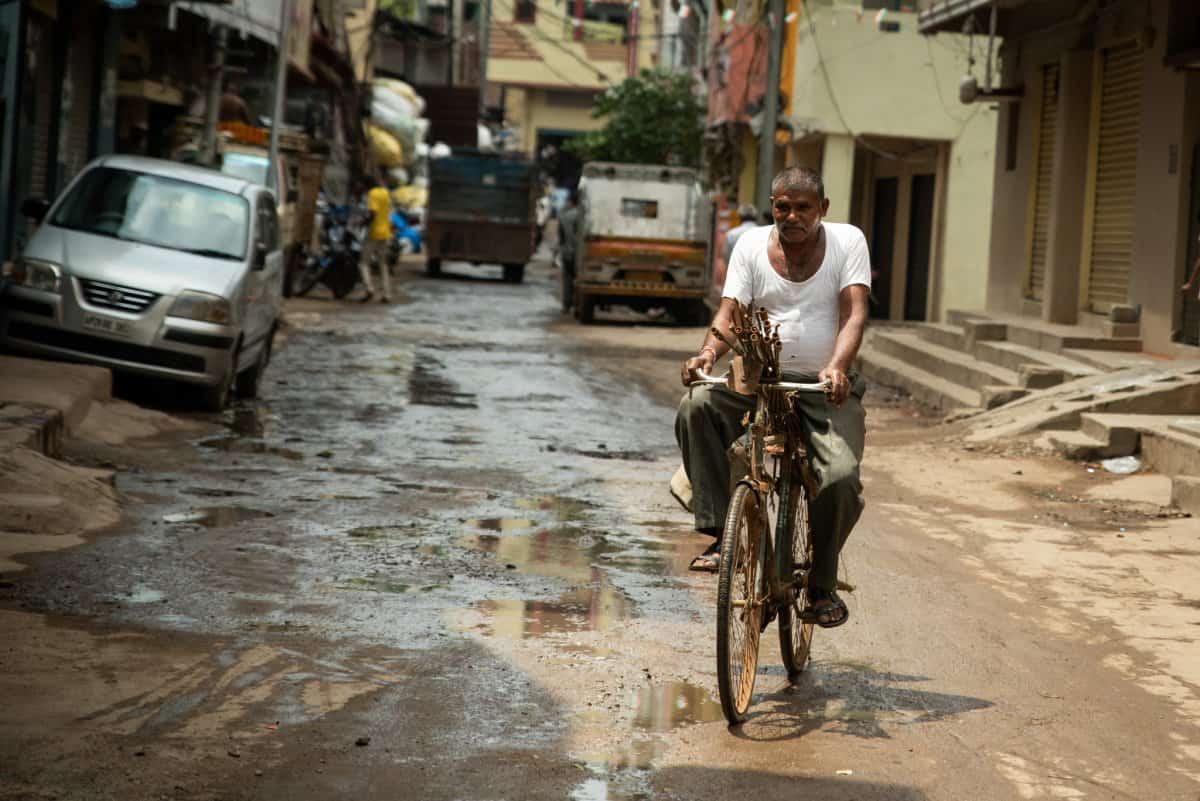 His main work is in Bholakpur, where blockages inside the houses are very common. Sewers silt up and the toilets emptying into them back up suddenly. It’s a neighbourhood with very narrow streets, he says, and most of the houses have common walls. Networks of sewers run through the houses, under bedrooms and living rooms, opening into tiny courtyards and even kitchens. 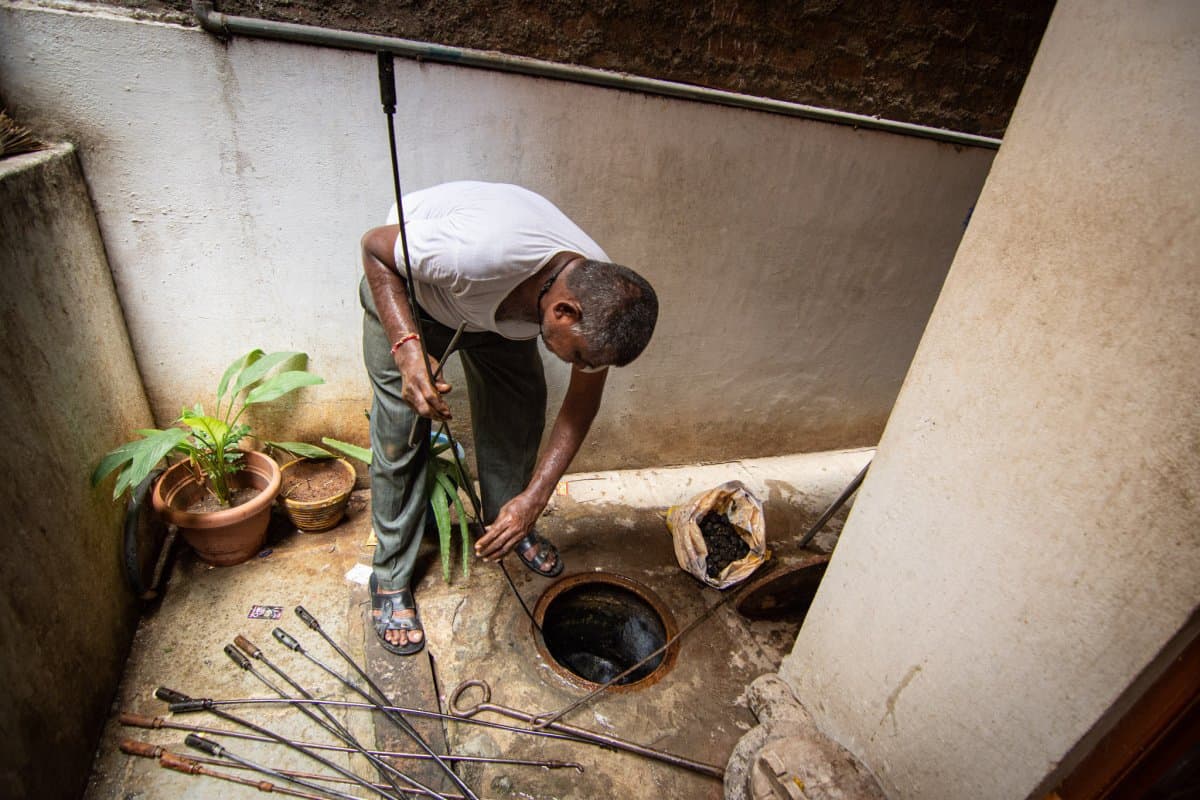 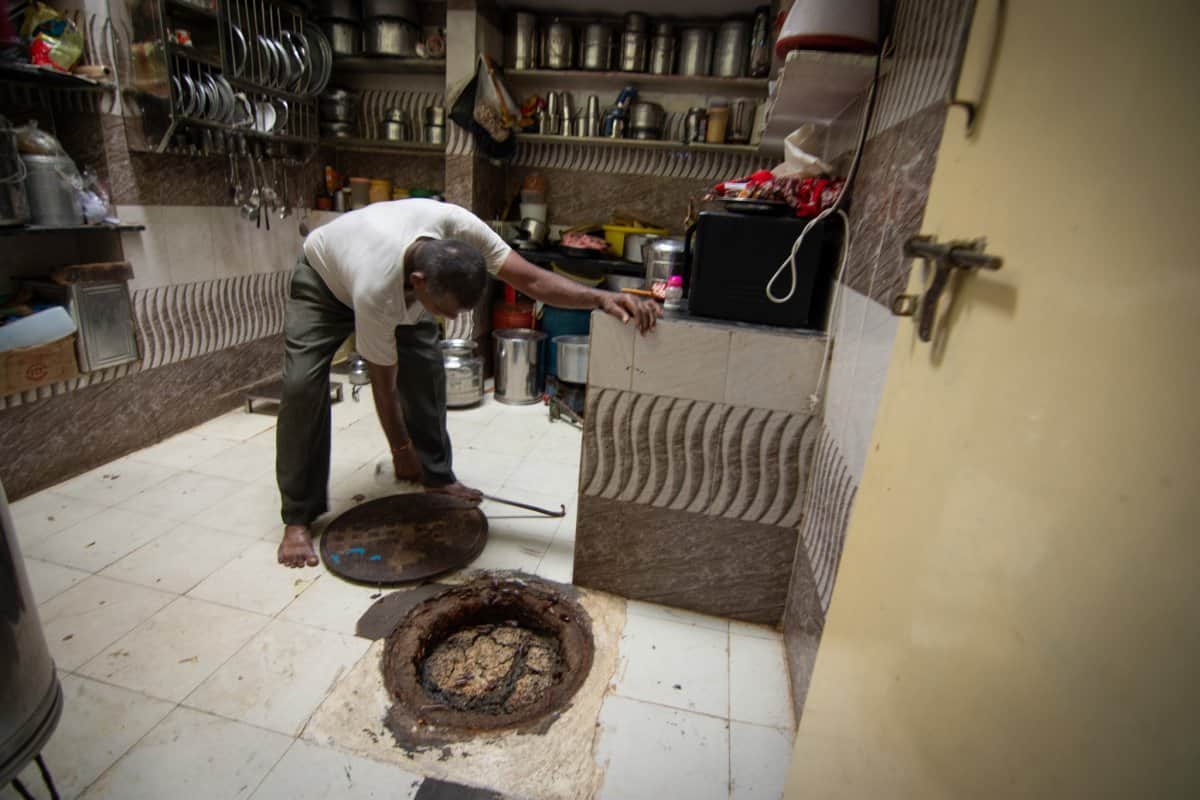 Venkat Swamy doesn’t get disgusted by anything: “I just put my hand through whatever there is and fix the problem. I don’t care. I just use my bare hands.”

Most sanitation workers do not eat for a good portion of the day when they work. They prefer to eat only after bathing and changing their clothes, and Venkat Swamy is no exception. “But I drink tea and smoke cigarettes between jobs. And after the work for the day is done, I buy a quarter of OC and drink it at the bar, then I go home, eat, and drink one more quarter.” 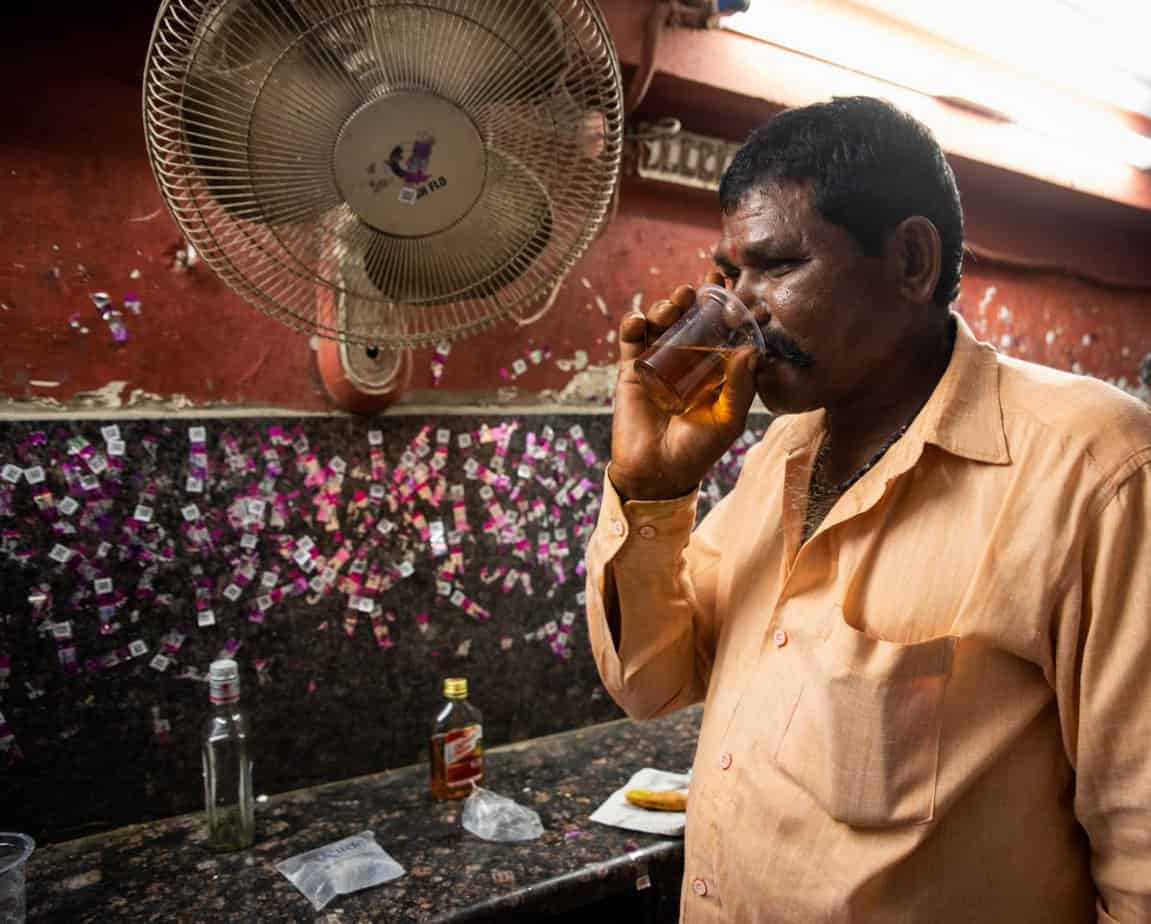 “I always return home nice and clean. No one can suspect that I clean sewers. I haven’t told anyone that I am a sewer worker. I tell everyone I’m a Water Board employee. People judge you, you know.”

Things have changed over 30 years, of course. Nowadays city employees aren’t allowed to get into the manholes, he says. But just 10 years ago he had to get right into the manholes to unblock sewers if he could not get the job done with bamboo strips. He just closed his eyes and dived in with a bucket to collect the material that blocked the sewers. Now he uses iron rods, and there are even mini-jetting machines[4] to help him. It’s so much easier. “Now I have the iron rods I can screw together; I fix three to four complaints – minimum — in half a day. I used to need an entire day, sometimes, just to cater to one complaint.” 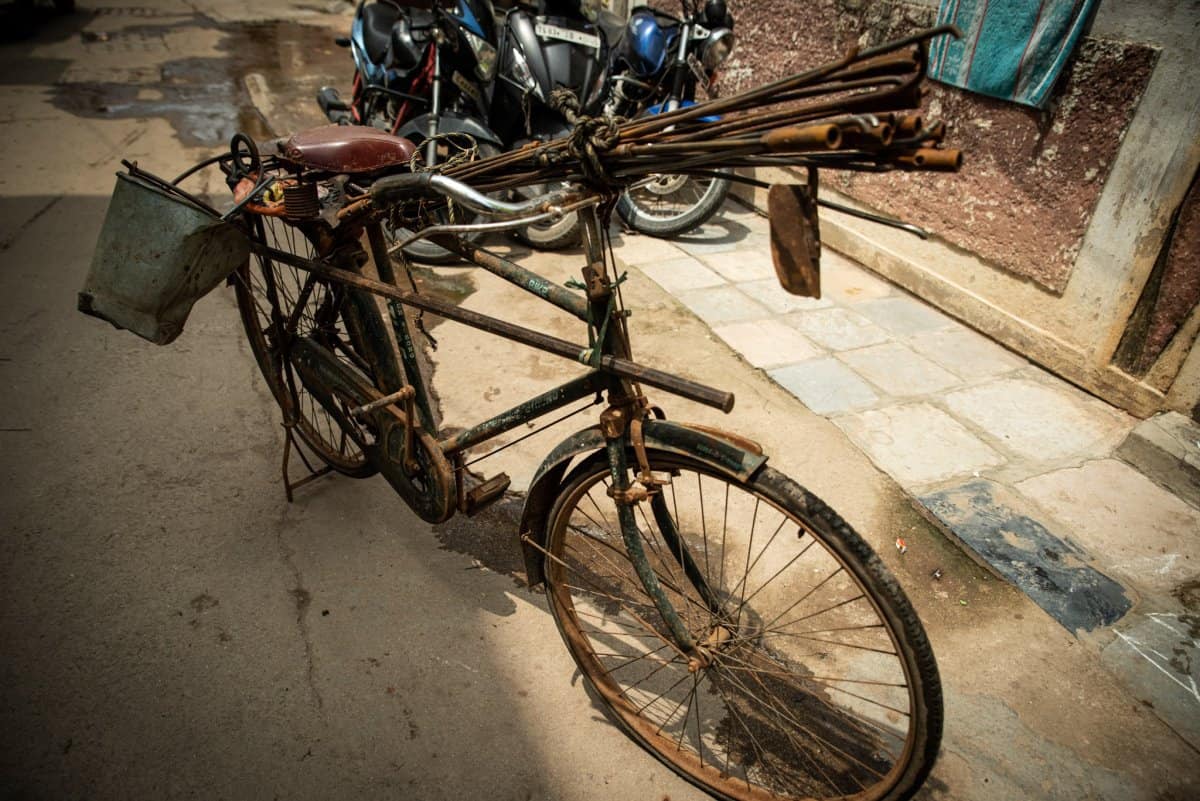 In those bamboo-strip years, at least two or three men had to work together. Even now, there are casual sanitation workers who use bamboo strips and crowbars; bamboo strips are 20 feet long, they can be tied together with iron wire and be made to go very deep. Unlike iron rods, they can bend. But they’re fragile, they break, and they are too weak to unblock silt that has become really hard. Casual workers cannot pay for iron rods, which are expensive, but Venkat Swamy works for the city and the city buys the rods.

I ask about mechanisation – the Sewerage Board has trucks with suction hoses now, they have jetting machines. I want to understand why sewer cleaning is still done this way: Does the city not have enough trucks, enough machines? Well, says Venkat Swamy, “the city isn’t responsible for a residential blockage. They have to prioritise main line blockages.” But sometimes, of course, the sewer line blockage backs up into the home, and the machines won’t go there, a man has to do it.

Besides, he says, “trucks cannot go everywhere. Not even to all mainline sewers. You should go to Mohammadnagar. Two people can’t walk next to each other on some of those streets.” 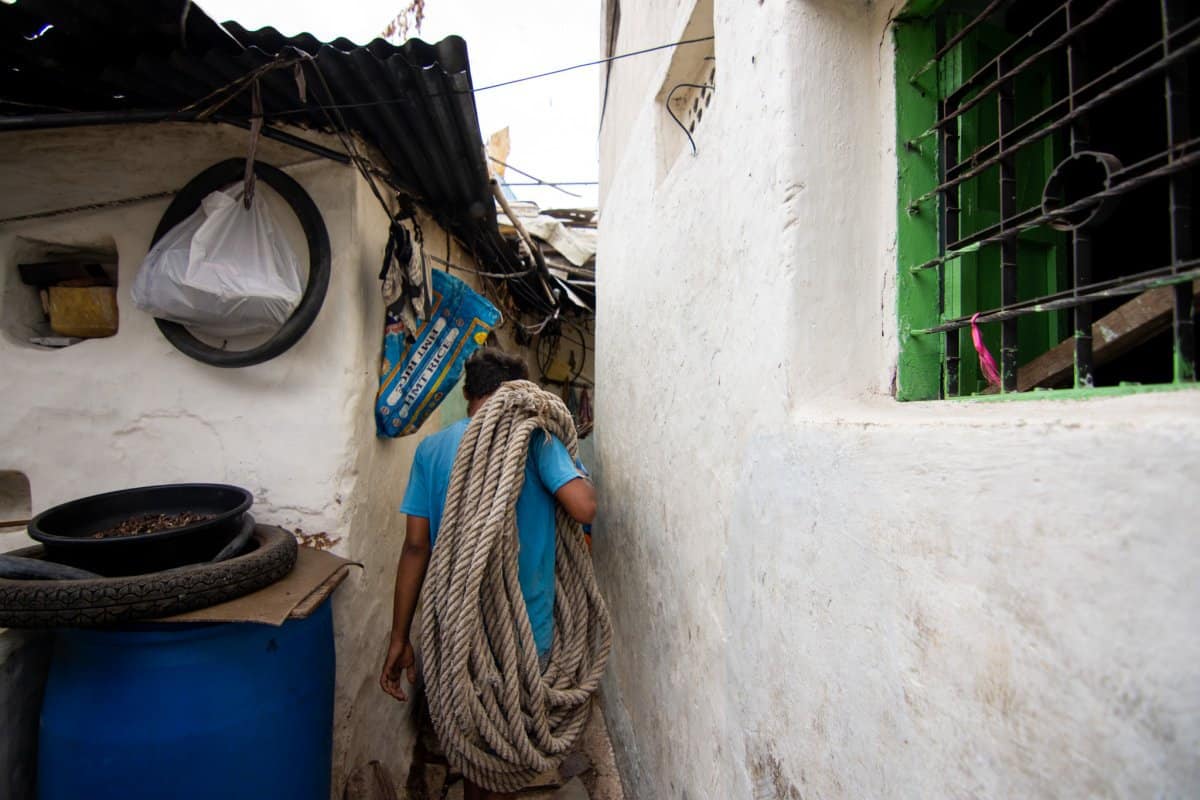 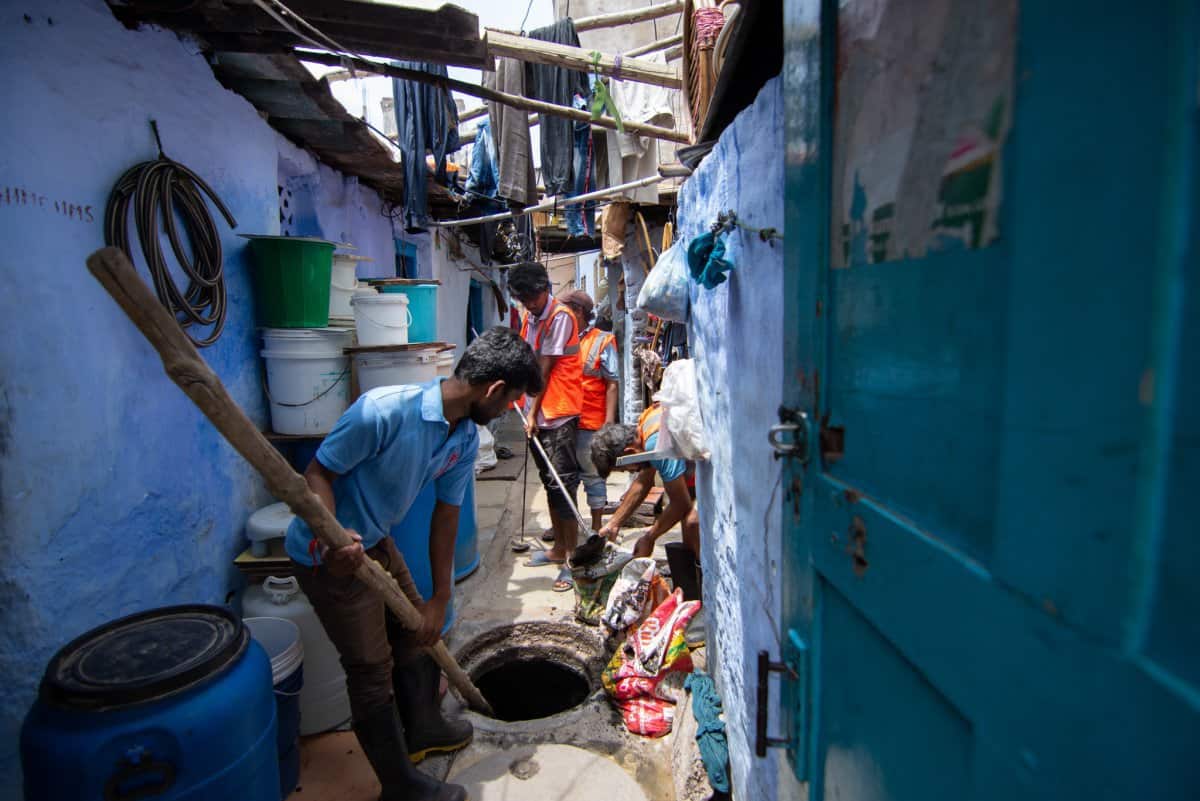 Sewer work is dangerous but Venkat Swamy has been very lucky. Last year, there were four of them, working on unblocking a manhole. He went out to get a cigarette, and when he came back, he saw that all three workers were inside the manhole and unconscious. He got in to pull them out but he fainted almost immediately. He thinks back to that day: “The public dragged all of us out and started pouring water on us. I slowly regained consciousness only to know that the other three were dead. It took me 18 days to recover. I should have been dead along with others. But I was the last to enter the manhole because of the cigarettes.” 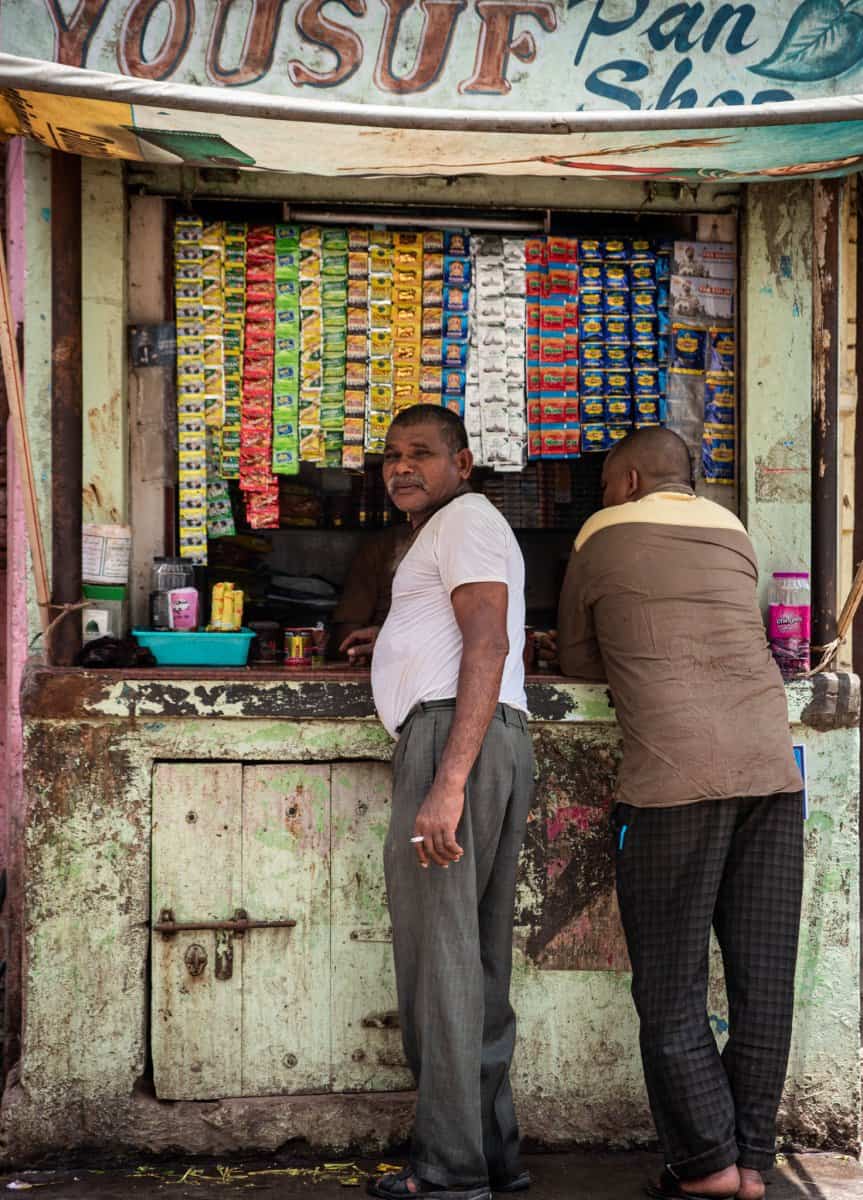 Venkat Swamy has about 13 years of service left with the Water and Sewerage Board. All the people, except two, who started with him are dead now. He should be worried but he’s matter-of-fact: “I am not too sure whether I’ll be dead or alive by the end of it.”

Authors’ note: The workers portrayed here gave their consent to having their names, photos, and life stories being published. Venkat Swamy had, in fact, kept the exact nature of his work hidden from many until now. We are deeply grateful to them. We also thank the Hyderabad Metropolitan Water Supply and Sewerage Board for helping us to understand how the system works; we saw first hand how challenging its day to day work can be.

[The article was first published on India Water Portal and has been republished here with permission. The original article can be viewed here.]

Get the Citizen Matters newsletterSubscribe

COVID-19: When the Supreme Court had to intervene

From ‘social’ to ‘physical’ distancing: Why language matters when we discuss COVID

Sustainable Development: Strategies for the long road ahead in Indian cities

What does it mean to live near a solid waste dumpyard in our cities?

Central Vista redevelopment: What we lose along with the trees around the National Archive

Over 60 lakh pensioners fast to protest delay in increasing dues