The alarming air quality in the National Capital region (NCR), comprised of Delhi and adjoining areas, has found fresh mention in the Economic Survey 2017-18 tabled in Parliament on January 29th.

It is well known by now that the average annual levels of PM2.5 – one of the most critical contaminants in the air we breathe – remain at above three times the prescribed level in this region.

The Survey reiterates the four main reasons for Delhi’s worsening air quality – crop residue and biomass burning; vehicular emissions and re-destributed road dust; construction, industries, and power plants; winter temperature inversion, humidity and absence of wind – and suggests that each of these source problems must be addressed systematically, through coordination between agencies and Central and State Governments and sustained civic engagement.

Citing a two-season study (summer and winter of 2015) by IIT Kanpur, the Survey pegs the approximate attributions to each of these sources as follows: 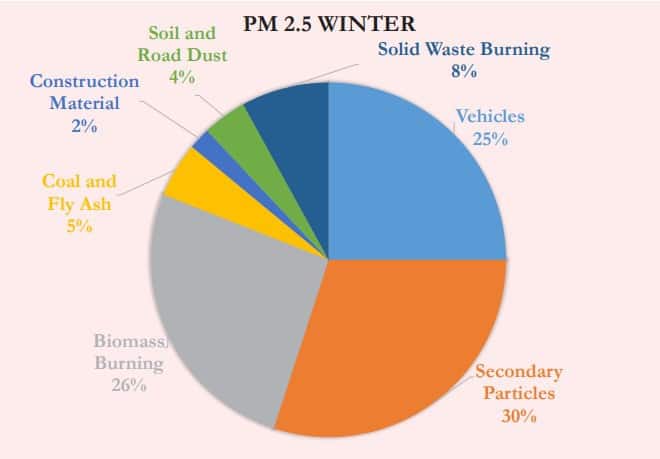 Keeping in mind the proportion of and causes behind each of these pollutants, a combination of emergency plans and medium-to-long-term actions have been recommended.

Short-Term Emergency Plans are to be implemented when the PM2.5 exceeds 300-400 mg/m3 over a 24-hour period. Measures include

Medium and Long-Range Actions suggested include

One such potential solution identified is the Happy Seeder machine that sows seeds without the need to remove paddy straw, and works well when the straw is spread evenly on the field through the straw management system.

It encourages development and implementation of business models with private sector and communities and incentives to shift to non-paddy crops.

As Mumbai gets ready to bid adieu to Bappa, the sea braces for more pollution

An estimated 1.63 lakh idols were bought by households this year, and over 19,000 idols for the public pandals. Most of these are made of thermocol and Plaster-of-Paris (POP), and will be immersed in the sea, along the popular beaches. Why is Mumbai unable to move from POP to clay idols?

To develop a city for transit, or transit for a city?

As urban centres thrive and expand beyond the reach of walking and cycling distances, it becomes important for cities to understand and provide the most efficient and sustainable ways of moving people and goods. Can transit oriented development hold the key?

Delicate and ephemeral, these fruiting bodies are beautiful. They are also emerging as a big favourite in urban kitchens, though not all may be fit to partake of. Our nature columnist sends photos of the different types of mushrooms and fungi one can see around us, in the monsoon season.