In a small city in Karnataka, a street was named after an important public figure, closely associated with the history of the town. Recently, this street was renamed after a national public figure, someone who has received acclaim for India globally but was not from this city. As we spoke to a resident, she lamented the fact that no one would finally remember what the original name of the road was; in years to come, that name will just disappear from public memory, as has been the case with some other roads in the city.

But this is perhaps not an issue with one city or town alone, and it merits some thought on whether there may be a way to record such ever-changing knowledge, especially as it relates to cities undergoing a period of natural evolution and flux. There are various aspects of a city which do not feature in common knowledge sources accessible to us. Elements of history which are not important enough to be included in encyclopaedias of the world like Britannica, or even relevant enough to be included in national or state curriculum textbooks. Where would one find, for example, a place to record that in the monsoons of 2013, the river that flows through their city had broken its banks to flood the very terrain that they learnt cycling on?

It is impossible to contain the volume and diversity of  knowledge about cities in printed books in an easily accessible manner. The only hope is that the knowledge can be available online, where anyone can add to it and everyone can access it.

Both academic and common knowledge on small cities is limited. In India, the largest city in most states is disproportionately bigger than the next largest city. The knowledge on small cities available online, either through academic articles or through open access platforms, is filled with gaps. Details on the history, culture, food, geography, civic administration or politics at the city level are often missing from the knowledge resources that exist, if at all.

The knowledge that informs the thinking and decisions for the future of urban India has largely been derived from larger cities. This reliance on the experience of big cities to think of solutions for all cities holds true not just in India, but globally. Various studies on urban growth, energy consumption, economic geography, water consumption, slums and informal housing, from Spain, Europe, Africa, China, Thailand, Indonesia, Ghana, and many other countries have pointed out that urban research has been disproportionately focused on big cities. Consequently, the knowledge available about them is also disproportionately larger than small cities.

The level of scholarly information available about cities can be seen as an indicator of the existing knowledge gaps. 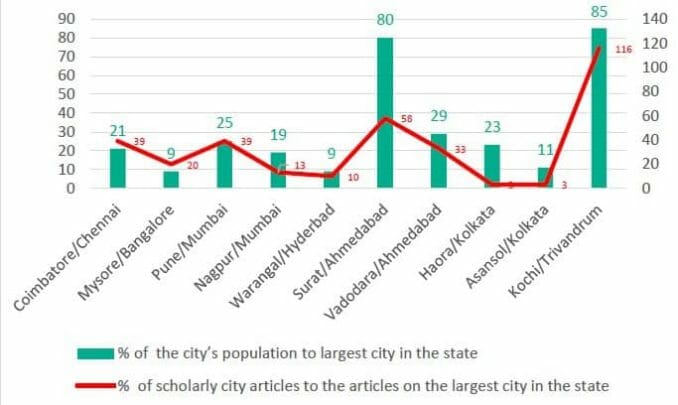 A look at other international academic sources also reveals a similar picture. A search on JSTOR yielded 8 articles for Hyderabad while zero for Warangal. Bangalore/Bengaluru had 16 articles and Mysore/Mysuru had two. Similarly Mumbai/Bombay had 61 articles while Pune had only 5 and Nagpur had none.

Not everyone seeks academic sources for knowledge regarding cities. Freely available online knowledge repositories such as Wikipedia are likely to be the preferred source for seeking information, including on cities, especially in developing countries. Studies point to the fact that users from developing countries are likely to use Wikipedia for in-depth understanding of a topic, including information about smaller cities.

But a digital divide seems apparent in the availability of open access knowledge about cities, especially smaller cities. 65 percent of the total articles on Wikipedia which are classified as cities, are stub articles as per Wikipedia’s categorisation i.e. with very little information or information that might be irrelevant or difficult to understand . For Indian city articles as well, 43% of the articles are of the ‘stub’ category while another 36% are in the ‘Start’ category i.e. an article which is developing but incomplete.

The best articles on Wikipedia in terms of their quality and comprehensiveness are categorised as Featured Articles. India, with almost 8,000 urban centres, has only 5 cities with featured articles on them. The articles which are classified as next best such as Good Article or level B articles cover many of the big cities in India including most of the million plus cities except a few such as Ranchi, Jodhpur, Amritsar among others. The rest of the smaller cities are either in a Start or Stub category, or do not have a page on them.

Overall, there are many cities that do not have articles on them or have limited or dated information. Sometimes the information about local administration is missing or information about significant events in its contemporary history. In many cities, simple facts such as the names of current commissioners, mayors, councillors are also not updated.

Users from low and middle income countries especially in Asia, Africa and South America (also sometimes collectively referred to as Global South) present an ironic situation: they have a greater need as well as inclination to access publicly available knowledge, but make limited contribution to the online knowledge itself. 60 percent of Internet users live in the Global South but constitute only 20% of Wikipedia contributors i.e. contributing to the freely available online encyclopaedia. However, in 2014, only 30% of Wikipedia page edits came from Global South. This contribution is in the context  of the fact that 35% of the global internet users are in just two countries China and India.

There is also significant socio-economic imbalance prevalent within the cities and regions of the countries in Global South. For nations, cities and communities, it is then imperative for this knowledge gap to be bridged, since knowledge is the key element that can bring about social change.

Increasing the volume of information and knowledge about small cities on the formal academic forums might take time, but we can start creating and publishing knowledge on online forums to reduce the knowledge gap among people in general.

As a step towards reducing this knowledge gap and to create knowledge ‘for’ and ‘from’ small cities, we started “Nagarpedia”.  Nagarpedia aims to bring focus to content and make the knowledge on our cities credible, readable and visible. It is our effort to mobilise Nagrikas, or citizens, to add to the knowledge about their cities to the existing encyclopedia of knowledge.

We have begun with Wikipedia, ‘the free encyclopedia’ so that citizens can add to the global repository of data available to access and addition by everyone. We are reaching out to all citizens to go to their respective city pages on Wikipedia, assess the knowledge that is hosted there and add neutral, verifiable and factual knowledge to it that might be missing. To know more about how to contribute to your city’s knowledge, write to us at info@nagrika.org or visit here.

[Yutika Vora is the co-founder and director of Nagrika.  She has previously worked with the World Bank and various national and sub-national governments, assisting on projects to improve governance and social protection across Asia. Tarun Sharma is the co-founder and director of Nagrika. He has previously worked with Ecorys, Deloitte, Ministry of Housing, Ministry of Urban Development, Indicus (now Nielsen- Indicus) and McKinsey. He has managed and implemented various projects related to governance, urban renewal, housing, livelihoods, mobility among others.]

About Tarun Sharma 2 Articles
Yutika Vora and Tarun Sharma are the co-founders and directors of Nagrika. Nagrika helps narrow the information and knowledge gap in the perceived understanding of small cities. It aims to bring small cities to the mainstream of the urban development discourse, contextualise the problems they face and develop context specific solutions for them.

FASTag, a prepaid rechargeable tag that will help digitise toll collection across highways, will be mandatory for all vehicles starting this December. Here is all you need to know about the new system and how it works.

Why the NHRC recognition for sex workers makes us especially happy

After a Citizen Matters article highlighted the plight of women in sex work during the pandemic, the National Network of Sex Workers pursued the matter more rigorously.

Helplines and apps that every voter should know about

Is your name there on the electoral rolls? How do you report any observed violation of the election code of conduct? Do you have a family member who needs physical assistance while voting? For this and more, check out what the ECI has to offer by way of smart technology.