In the spirit of what Benjamin Franklin once said – “An ounce of prevention is worth a pound of cure” – the Food Safety and Standards Authority of India (FSSAI) released a draft notification on June 27 2019 seeking to place a mandate on packaged food companies to label high fat, high sugar and high salt content on the front of the package, using a traffic light signalling system. The overall objective is to let consumers make an informed choice.

One of the most notable points in the draft rules relates to the Front-of-Pack (FoP) labelling; in particular, a ‘red-coloured’ warning symbol that will help identify foods high in calories, saturated fats, trans fats, added sugar and salt. The proposed FoP label will also tell consumers about the number of calories and quantity of salt, added sugar and fats per serve. Consumers can directly see how much of their recommended dietary allowance will be exhausted if they eat one serve of the packaged food.

Why is this important?

Obesity — being grossly fat and overweight – with all the associated risks of hypertension, diabetes and cardiovascular disease, as well as the many resulting psychological effects such as depression, low self-esteem and low confidence, are rising concerns worldwide today.

The story is no different in India. According to medical journal “The Lancet,” India had 30 million obese people in 2016 and the numbers are expected to cross 70 million by 2025. The World Health Organisation (WHO) has explicitly identified diabetes as a growing challenge in the country with an estimated 8.7% diabetic population between the ages of 20 and 70 years.

One of the factors contributing to this could be the rapid growth in the consumption of packaged food. A survey by industry body Assocham shows that there has been a major shift in food habits in the metropolitan cities, with about 79% of households showing a preference for instant food, thanks to the steep rise in dual income levels and standards of living and convenience. While this may be good news for the industry it may not be such a positive development, as far as people’s health is concerned.

Reading the label for nutritional values is, however, not everybody’s cup of tea. The colour- coding scheme is an easy way to identify high risk ingredients. Other countries like UK, France and more recently Sri Lanka have also been pushing the industry in this direction.

Consumer awareness on food labelling and nutritional content is still limited to certain sections of the urban population, but the new labelling system is expected to raise consciousness in non-urban areas as well. Visual messaging through symbols is stronger and more effective in communication. With the above in place, FSSAI may just succeed in explaining the content of packed food products to people in semi urban and rural areas, from the educated to the illiterate, and from children to senior citizens. This also goes well with the advocacy campaign, “Aaj Se Thoda Kam” that FSSAI has been running to reduce the intake of salt and sugar.

Things to watch out for

However, the system is not without its flaws. There might be a huge risk of over simplifying the nutritional value of the product through such labelling.

Let’s take ghee as an example. While it can only be labelled as RED because it is fat, ghee has its own benefits that cannot be communicated through the label; instead the ‘RED’ status could cause panic among consumers, resulting in undesirable behaviour.

Then there is the angle of indigenous food where most of the Indian recipes are high on fat, salt and sugar, popular among these being bhujia, sonpapdi, achaar etc. The Indian food industry is dominated by such medium and micro enterprises and they may not have the capability to put in the money to find substitutes which will improve their health rating. For now, many in the industry are vehemently opposing it.

Speaking to The Economic Times, Subodh Jindal, President of All India Food Processors’ Association (AIFPA) said that the regulations were neither scientific, nor practical enough to be implemented. He  also pointed out that the content of fat, salt and sugar in packaged food depended on the customer’s taste requirement and not on manufacturers’ choice.

Overall, however, the draft regulations have been welcomed by consumers. In a press release issued by the Centre for Science and Environment, New Delhi, its director general Sunita Narain said, “This is a big step, which will enable people to identify unhealthy foods that are high in fats, sugar or salt. It should help to contain the growing incidence of obesity and non-communicable diseases.”

In an online poll through our Facebook page FoodSafetyWorks, consumers came out with overwhelming support to implement the colour coding scheme. The data of course is limited to the audience we were able to reach out to. In the overall analysis, however, this is definitely a positive step, but it remains to be seen how the industry adopts and adapts to this. 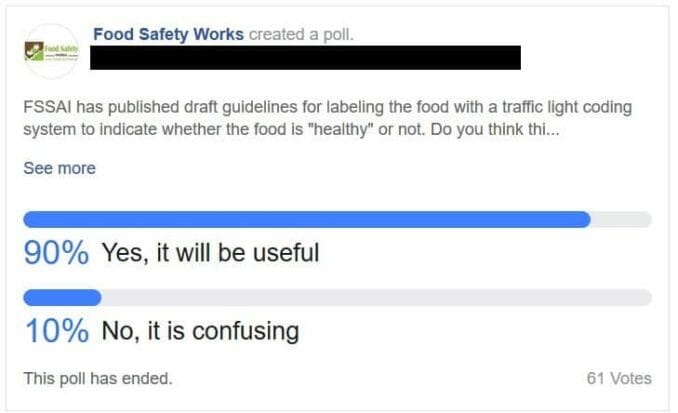 About Disha Manjhi 1 Article
Disha Manjhi is Senior Associate Consultant at Food Safety Works, a food safety consulting company based out of Bangalore, which helps implement Food Safety Management Systems for companies in the food business.

Whitewashed roofs or Whatsapp alerts: How is your city planning to beat the heat this summer?

IMD spells a gruelling summer ahead with temperatures 0.5°C to 1°C higher than the long term average. From Ahmedabad to Nagpur to Hyderabad, what are cities doing to minimise heat-related casualties?

For the urban poor, the sharp rise in prices of cooking oil, gas and other essentials will inevitably mean having to go hungry for longer periods.

A pan-India research study identifies the challenges faced by urban governments from devolution of power to financial independence, and possible solutions to strengthen them.