On December 3rd 2017, Pimple Saudagar, an upmarket suburb under the Pimpri-Chinchwad Municipal Corporation (sister city of Pune) hosted a meeting of citizens, apartment associations, shop owners and not-for-profit organisations to commit themselves to a movement that could alter the ecological footprint of the entire area. Come January 1st and Pimple Saudagar has resolved to go plastic bag free, entirely!

Today everyone is aware of the impact of plastic pollution; there have been enough campaigns, disincentives for usage (such as imposing additional charges for plastic carry bags), incentives for avoidance (such as distribution of free bags by NGOs ) and yet urban citizens have become such slaves of single use plastic that there has hardly been any dent in usage rates.

Environment conscious residents of Pimple Saudagar therefore feel that the time has come to put a strong foot down and get all citizens and shop-owners to affirm an agreement under which plastic bags will not be given or used. Period.

It all started when Roseland Residency (incidentally a winner of the National Swachh Bharat Award 2017 under the Residents Welfare Association (RWA) category) invited Ecoexist, a Pune-based enterprise working in promoting ecologically sensitive products like cloth bags, safe Holi colors, eco-friendly Ganesha idols etc. for a discussion on sustainability. They invited residents of all housing societies in the neighbourhood, shop owners and local corporators and that is when the idea of a plastic-free Pimple Saudagar gained momentum.

Today, the movement has more than 35 core volunteers with participation of most societies in the suburb, implying the commitment of around 10,000 families to this campaign.

The mantra is simple: reject the ‘use and throw’ culture and move to ‘Use me again’. Reduce waste.

Carry your own shopping bag. Invest in a good cloth or a jute bag. Keep a few in your car, or two-wheeler, or your office bag. Postpone your shopping if you are not carrying your own bag.

If items are small or light, carry them in your hand to your car or two-wheeler or home. It is not uncommon to find people carrying a single milk packet or a loaf of bread or just a few strips of medicine in a transparent polythene bag. That has to be stopped. 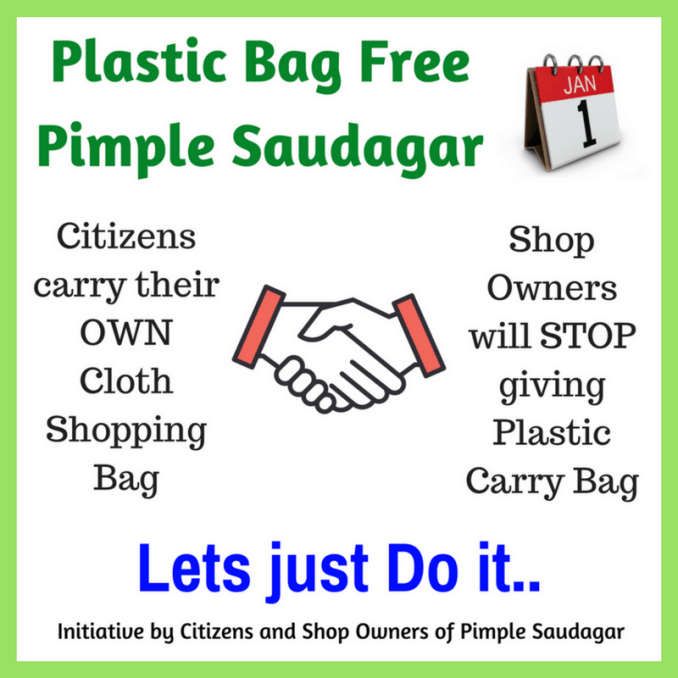 One of the most crucial steps to ensure the success of such an area-wide campaign was to secure the commitment of all stakeholders. Plastic pollution is like a chicken and egg problem: who will blink first becomes a critical question. People do not want to change their habits of convenience as long as plastic bags are easily available in shops, and shop-owners do not want to stop offering plastic bags for fear of losing customers and business. People and shop owners are the key entities of this problem and unless they come together, the problem will not be fixed despite the laws and guidelines in place.

Short term solutions such as distributing free cloth bags, moving to non-woven polypropylene (PP) bags (which is still plastic, but may be slightly more durable than single use plastic), distribution of  bio-degradable bags by shop-owners are not considered as these are not sustainable solutions, and will not address the root cause of the problem, which is a general affinity towards use and throw. Short term options such as the above will merely result in generation of a different type of waste. Hence, the emphasis of all awareness programmes about this campaign is on bringing your own bag to the shop.

Volunteers of the movement have put up banners in all societies and have conducted several rallies and walks over the past few weeks in addition to conducting an aggressive social media campaign through Facebook, Whatsapp and the like. They are aware that there will be challenges, resistance and excuses to begin with, since any initiative which requires a change in people’s habits is always an enormous task to accomplish. But the focus in Pimple Saudagar is strong and unwavering, and if indeed these attempts bear fruit, it will have done its part in ensuring a cleaner and greener planet.

About Sidharth Naik 1 Article
Sidharth Naik is a resident of Roseland Residency in Pimple Saudagar, Pimpri Chinchwad. He is a strong believer in "My Waste My Responsibility" for a sustainable tomorrow.

Municipal corporations formed for three hill towns in Himachal Pradesh — Will it solve their woes?

A former BJP MLA from one of the towns expects the elected bodies to ensure better execution of works and funds utilisation. People are not very hopeful, though.

History of cities, as remembered by the people

Citizens are often ahead of public officials in exploring the history of their cities and neighbourhoods; their success could point the way forward.

Tourism and local industries at a standstill, will infrastructure revive Himachal’s urban economy?

Himachal Pradesh has seen nearly 80 per cent loss of livelihoods, both rural and urban. The government is now pinning hopes on opening up construction and other infrastructure projects.