The fifth phase of Lok Sabha elections will be held on May 6th in 51 constituencies across Bihar, Jammu and Kashmir, Uttar Pradesh, Jharkhand, Madhya Pradesh, Rajasthan and West Bengal. The Association for Democratic Reforms (ADR) has published its comprehensive analysis of candidates contesting in this phase.

In a first, around 12% of the candidates in the fray on May 6th are women. This is the highest percentage of women so far and surpasses the previous four phases of elections. It is five percentage points higher than the 7% representation seen in the first phase. However, in absolute terms, women continue to form a minority even in the upcoming phase. 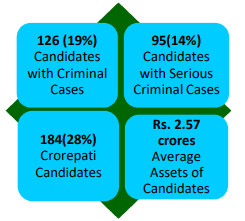 Jayant Sinha of BJP is the candidate with the highest income. He is contesting from Hazaribagh in Jharkhand and has a total income of Rs 5.72 crore. This includes the incomes of his spouse and dependents. His assets are worth Rs 77 crore.

However, this doesn’t make Jayant Sinha the richest of the candidates. Poonam Sinha, wife of former actor and politician Shatrughan Sinha is the richest, with assets amounting to Rs 193 crore. She is contesting as a Samajwadi Party candidate from Lucknow, Uttar Pradesh.

Do cities matter? What BJP, INC and CPI(M) manifestos say on urban issues

From devolution of powers to local bodies, to the formation of National Urban Mobility Mission, to the creation of a separate Ministry for Water; what all are the promises made by political parties regarding urban issues in their manifestos ?

Avoiding election frenzy and the intense heat of Delhi summers, South Delhi MP, Ramesh Bidhuri is seen spending most of his time in his poll war room in Mehrauli. His complacence comes from BJP’s strong

Mumbai South is linguistically and socially diverse. As a high profile battle looms between sitting Shiv Sena MP Arvind Sawant and the INC’s Milind Deora, here is a detailed report on the candidates and voter concerns in the constituency.