It is 4:15 a.m. and this is the scene at the gates of the Samta Nagar Post Office in Kandivali East, Mumbai. Men (mostly) just hanging around on the street, doing pretty much nothing. Chances are, they’ve done this before, but not early enough… the reason for this repeat visit. 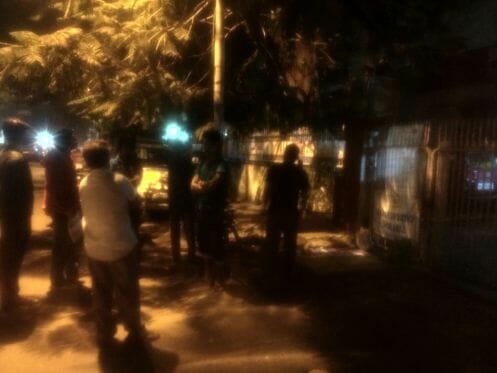 As I approach the group, Hukam Singh greets me. We were among the unlucky ones, not in the “first 20” of the previous morning. “Madam ka naam lick do bhai… athara” (write madam’s name brother… eighteen), said one. Yeah! I was in the first 20.

This is probably the scene at every post office and place authorised to do Aadhaar enrollment and/or updates in Mumbai. 20 is the key number… this is the maximum number of tokens issued by this post office for Aadhaar, on weekdays. It is 15 on Saturdays.

The informal queue system is a citizen-devised initiative, from which the post office officials distance themselves. The first one who reaches, starts the list for the day. He writes his name and subsequently, people who come add their names to the list. The list could start at any time… today’s began at 11:30 p.m. yesterday. After missing out on two days, this boy Sawant, decided he might as well sleep at the gates to be sure of a token.

An auto rickshaw stops and as a man alights, another jumps off the pillion seat of a motorbike. “Till which number?”, they both ask. 18. “So, you’re 19 and I’m 20! Tokens are done for the day.”

“20 names on the list?” It was a young lady who needed to update her mobile number linked to her Aadhaar. I’d met her the previous day. She gets off the taxi, contemplates for a few seconds. “Tomorrow I’ll come at 3.”, and she gets back into the taxi that drives off.

It is now past 4:30 a.m. and an elderly lady arrives in a car driven by her son-in-law. It doesn’t take her long to find out she is too late… again! “I’ve done this four times already, and each time I’ve been coming earlier and earlier.” Number 20 then reveals that three more people from his family need to get their Aadhaars, so instead of spending his time twice, he would return the next day, sufficiently early to ensure four places. So old aunty gets promoted to 20. “Aunty, you don’t wait, you go home and come back before the post office opens. We will keep your place.”, the men tell her. “Madam, you also go home and come back later.”, they tell me. But I decide to stay.

The gates of the post office open at 6:30, and those of us around shift ourselves from the road to inside the compound. “It is cold here… when I came at 3:00 I was fine, but now I am feeling cold.”, says Yadav, a cook at a roadside eatery. Yadav’s finger prints are not getting recognised, so he has to get his biometrics redone. “My hands get hot when cooking… and burnt sometimes… the lines on my hands keep vanishing.”

As the sun rises, the postal truck roars in and reverses into the compound. The post lady is seen doing a count of the huge letter bags and parcels that will find their way over this massive country.

Pappu and his little daughter walk in. She doesn’t have an Aadhaar and needs to get admitted into school. He is told that it is pointless to wait as there are more than 20 names already on the list. He looks disappointed and comes to me for advice. I tell him to write his daughter’s name and explain that if anyone in the list drops out, they have a chance to be in the 20. “There are only 20 tokens. Come by 3 and you will get one”, someone tells him. “But the office opens at 8. I thought I was early!”

A postman who is just entering the place hears the conversation. “Today we are not going to give tokens or look at any list. Yesterday you know there was trouble. Just stand in a line and the first 20 of you will be attended to one by one.”

Yes, the previous day there was trouble. There were two lists, so there was a dispute about which was the real list. It was alleged that a couple of the boys had started one list at 1:00 a.m. and after a few names were on it, they went home, slept for a while and returned at 6:00. So one of the men went to the police station and brought the head constable to get the final list settled.

It is nearing 7:00 a.m. The place starts getting crowded. People who went away for walks, or to have tea, return to claim their places in the line. We see proxies being replaced by the actual Aadhaar service seekers. Yes, this one man was geting paid to stand in for someone who was too lazy to come so early. Jaggi Singh leaves as his wife reaches after her night shift. “Lucky that I had day shift and she had night shift. I could come to stand for her. Once her mobile number is updated, it is easy to do Aadhaar changes online.”

The old lady who was graciously allowed to go back home comes back for her 20th place. There are many fresh faces.

People are looking at their mobiles. Just a few minutes to go. Most of the fresh faces are unaware that the others have already spent several hours.

“Stand in line.” Hussain takes a head count. He lost his Aadhaar card with his wallet and cannot retrieve it online. Now that there is going to be no token system, he hopes he can keep his spot in the first 20.

At 8:00, the doors of the post office are opened. One of the staff appears with 20 paper tokens in hand. Each one is numbered and carelessly stamped with post office rubber and date. He takes the list that Sawant has maintained, and calls out the names one by one. “Ah. So they are going by the list! My name is not on the list,” says a lady in sun glasses. “Anyway you hadn’t a chance. You came just half an hour ago,” someone tells her.

18. I have the token in my hand! Today my Aadhaar update will be done! Token 9 is still in the postal staff’s hand. It seems the person who had put his name down didn’t return, so he gave it to the lady who was standing first at the door, though her name was not on the list. Lucky thing! Pappu is not so lucky. He and his daughter will have to come another day.

“What is the meaning of this list?” an elderly man asks. “Is it official or what? Anyone can make a list.”

“Ok. From tomorrow, don’t make a list,” he tells all of us in the line. But what’s the point. We aren’t the ones who will be there tomorrow. And coming to think of it, this list, to an extent, ensures that first come is first served. “You try to run to the door at 8:00 a.m. You won’t have a chance against the young guys,” someone tells the elderly man.

Why are there only 20 tokens? “There is only one lady staff who has been trained in Aadhaar. And we have just one set of biometrics equipment. And where is the space?” 20 tokens, 8:00 a.m. to 1:00 p.m. on weekdays (15 tokens, till 12 noon on Saturdays). This is all the post office is handling.

A branch of HDFC Bank is also doing Aadhaar enrollments and updation. “I got an appointment for 15th May,” says Mr Pawar. “Can’t wait for seven weeks, so I came here to see.” It is clear that HDFC Bank is more organised than the post office. It is following an official queue system of sorts… something like a much-in-demand doctor with a long patient list.

At number 18, 12:30 p.m. is when I walk out of the post office, with the Aadhaar update acknowledgement in hand. 4 hours to get the token, 4 hours awaiting my turn. A full 8-hour work-day! For working people, it is a day’s leave, and for daily wage workers… well, no wages for the day. By 1:00 the lady at the Aadhaar counter will finish with the two tokens after me, and wind up for the day.

Of course, I have had enough time to have a good breakfast at Shaktivel Idliwala and read the newspaper cover to cover. Fill up Aadhaar forms for a couple of women who do not know English. Assist an old man to withdraw his pension from his post office savings account. Know more about Hussain’s family than I know about the family next door. Discover that scanning the QR code of the Aadhaar card reveals all the individual’s personal information. Find out that Dubai is a better place to work in than India… the salary compensates for the work pressure. My new Aadhaar friends!

Most importantly, guide about a hundred souls who walk in at 9:00 or 10:00 or 11:00, hoping to get their Aadhaar registration or enrollment done in the first visit. “You’ve been here from 4:00!” they exclaim in total disbelief.

Over 70,000 babies are born in India every day. All of them need to get Aadhaars before they can get admission in school. Biometrics need to be updated for every child on turning 15. According to UIDAI, 1% of adults still do not have Aadhaar. Those who have come back to India and need to file income tax returns as residents need to get Aadhaar. To prevent your bank account from getting frozen on 1st April 2018, you need Aadhaar. Name change/correction, address change, mobile number change… all these add to the Aadhaar service count.

Till a few months ago, there were privately-run authorised Aadhaar Kendras operating. Most of them, it is said, were exploiting the public… charging them for Aadhaar enrollment (which is free), over charging for updates, forcing people to get plastic Aadhaar cards, charging for running queries… in general behaving like they were doing everyone a big favour, rather than providing a service.

Well, they were in a position of power, but maybe they felt they were being inadequately compensated and were looking to make quick bucks. Citizens started complaining about the unfair practices to the authorities, with the result that the government had no option but to suspend these licences.

If Aadhaar is mandatory for so many things, we just need more counters, more proper fair-play centres, more infrastructure… hire and train more people… create more jobs! Spending 8 hours to get your Aadhaar updated or to enroll is just insane!

[The article first appeared in the author’s blog and has been republished here with permission. The original post can be read here.]

About Arathi Manay Yajaman 3 Articles
Arathi is market researcher who loves to run and write. She has been actively involved in issues that affect citizens, including apartment management, waste management and lakes. She currently lives in Mumbai and is Community Anchor with Citizen Matters.
Website Facebook Instagram Twitter YouTube LinkedIn

Nipah virus: How to avoid infection and fever

Bats are being culled, every case of fever is scrutinised carefully. But the nation has one lab which certifies the cases of Nipah. What does a citizen need to know about Nipah?

Soon, a green city in each Indian state

The concept note unveiled by the government looks at combining existing renewable energy programmes, such as those dealing with solar power, electric vehicles or waste to energy.

The traffic management system, launched under the Bhopal Smart City Mission, is meant to regulate traffic, bring violators to book and address infrastructural and design lapses. Unfortunately, none of these are being done efficiently enough.