Climatic and non-climatic factors intersect and create an entire tribe of marginalized and vulnerable people. Incidentally they form a large proportion of the informal economy of Bengaluru and other cities.

This photo essay looks at the living and working conditions of one of the most marginalized groups in Bengaluru namely the waste pickers. The focus is on those who live in undeclared, blue tent, temporary squatter settlements. Our field research revealed that most of the inhabitants in these settlements are migrants from West Bengal, a distinct region in the East of India. 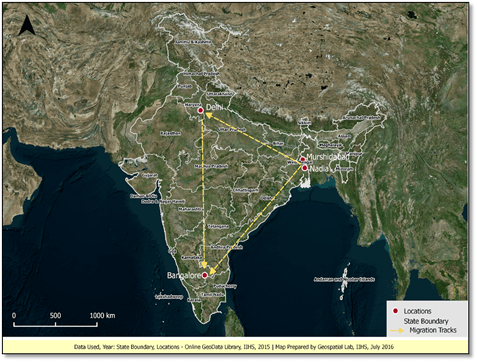 For the residents of the informal settlements that we visited, migration from West Bengal has been an outcome of both push and pull factors. The major push factors have been climatic events like floods and cyclonic storms, particularly the cyclone Sidr in 2007. The migrants are typically landless agricultural labourers who have suffered from the agrarian distress and social and economic marginalisation. Relatively abundant livelihood opportunities in big cities like Delhi and Bengaluru act as  major pull factors for these migrants; particularly in the context of poor life experience in their native location.

The lure of the big city 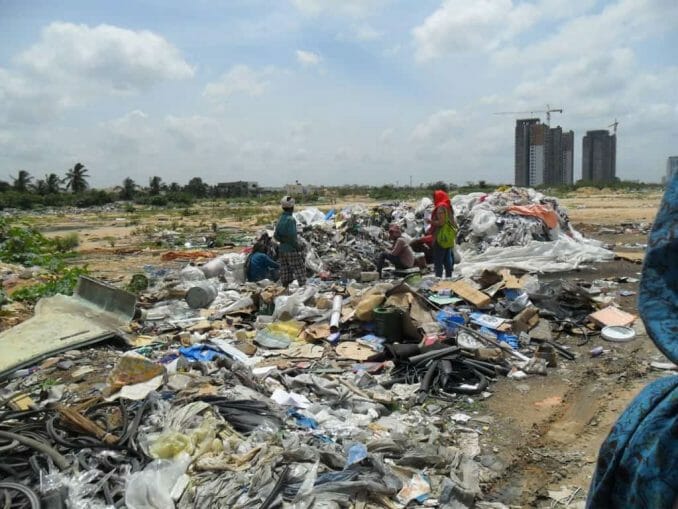 Bengaluru as a growing economy offers livelihood opportunities to many. The poor and marginalized resort to work in the informal economy since the formal economy has several entry barriers. The informal sector, especially in  construction and waste picking, proves to be a feasible opportunity for the poor and marginalised, since there are less entry barriers like education attainment or skill and no need for any formal training. 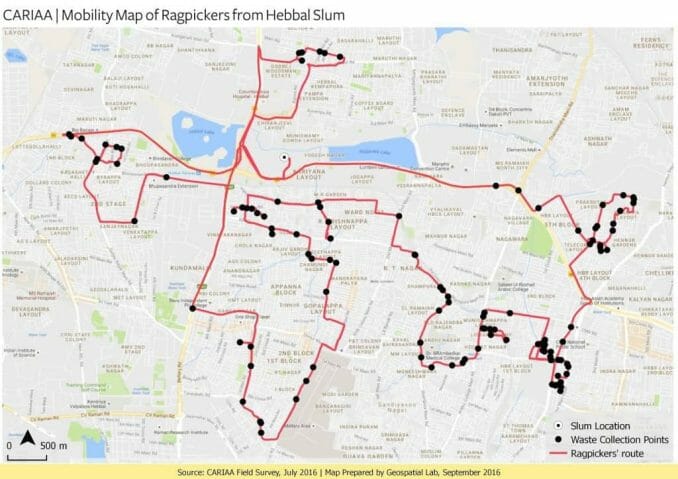 The map above illustrates routes covered by a waste picker on his cycle in a span of three days.  Waste pickers provide an essential service by driving the city’s recycling efforts, keeping the streets clean especially in areas not covered by the local government. They are vital for the effective functioning of an urban system. However, this is a dangerous, and discriminatory livelihood, where as waste pickers they are typically invisible in the eyes of the city.

The grass is not exactly green on this side 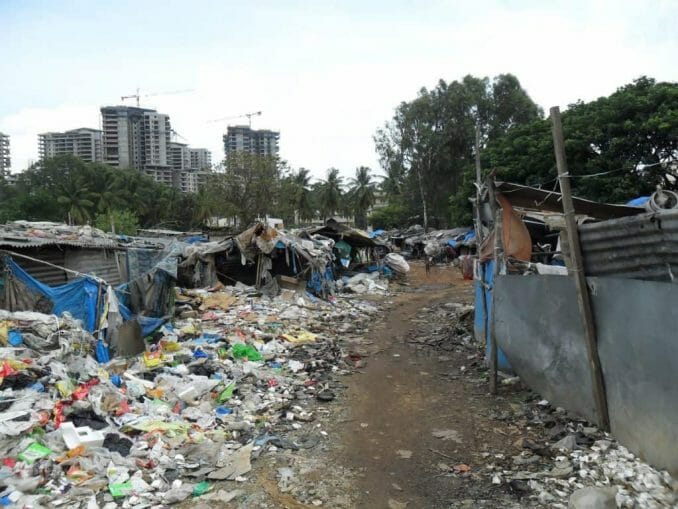 Bengaluru has witnessed highly exclusionary urbanization patterns — rising price of land and rentals have made housing a major issue, resulting in a significant proportion of the city’s population living in informal settlements (notified and non-notified) scattered throughout the city. The city is thus unable to absorb the surge of migrants.

Unfortunately, the poor have to live in temporary settlements with no form of tenureship or rights over the land. These settlements are cut off from basic services and infrastructure such as networked water supply, central electricity network/grid, with no sanitation and waste disposal facilities. Their dismal living conditions and livelihood results in mal-recognition and further marginalization by the city.

The burdens of the invisible masses 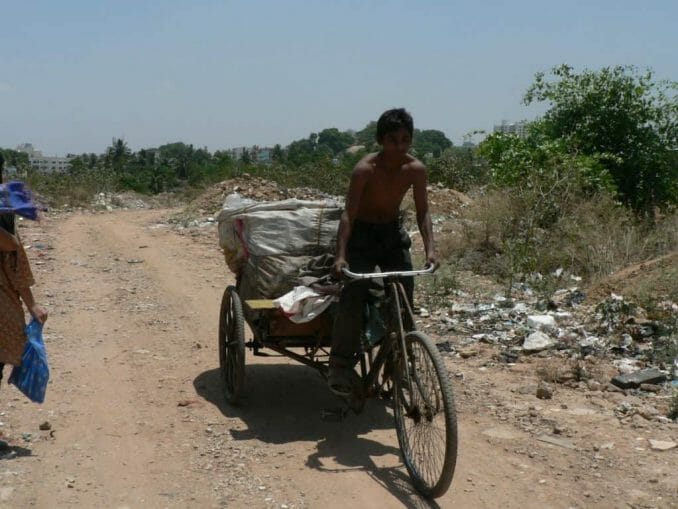 As waste pickers, they are exposed to hazardous and toxic material. They suffer from headaches, dehydration and fatigue as they travel in the scorching heat to collect waste. This group is among the most vulnerable groups noticed in the informal settlement scoped in Bengaluru as they are at the bottom of the hierarchy of the informal economy, represented by the quiet violence of neglect, disdain, ill health and uncertainty.

The unknown variable in the equation 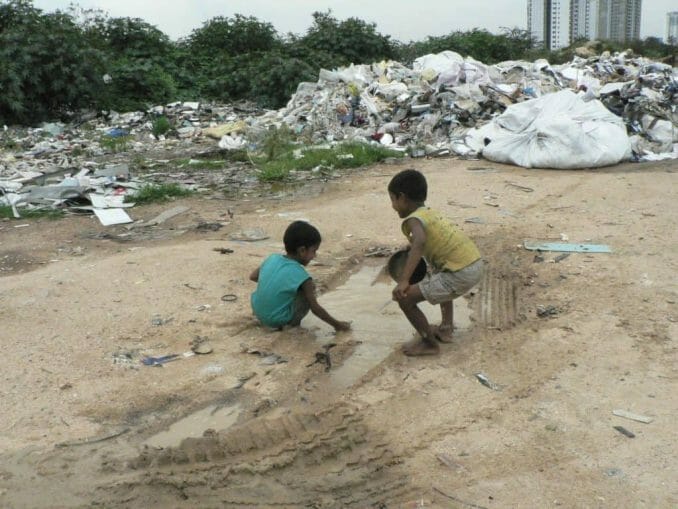 Climate change in the urban centres has very subtle impacts and it is difficult to distinguish between risks that are an outcome of improper urbanization and risks arising from climate-induced events. Climate change acts as a crisis catalyst and shapes and reshapes existing vulnerabilities.

The effects of climate change fluctuates among different social groups and often falls disproportionately on the poor and socially and economically marginalized such as waste pickers as highlighted in this.

A choice between two injuries 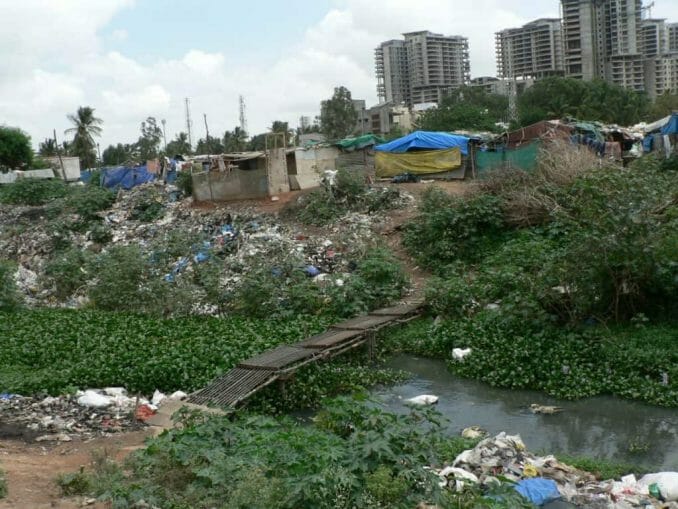 Thus, the moot question for these unfortunate migrants becomes: Destitution in their homeland, or injured identities and perilous livelihood in a bigger, thriving city such as Bengaluru?

About Kavya Michael 1 Article
Kavya Michael is a post-doctoral researcher in Indian Institute of Human Settlements. Her doctoral thesis focuses on the linkages between inequalities and environmental change in an Indian context, with a special focus issues of climate justice in India. Co-author Tanvi Deshpande (tdeshpande@iihs.ac.in), is a research associate at the Indian Institute for Human Settlements and works on the CARIAA|ASSAR research programme. Her research interests include understanding vulnerability, response mechanisms and cross scalar and temporal issues in an urban setting.

Can ‘open street’ events lead to fewer cars in our streets?

Cycle days, Raahgiri, Pathotsav — events that promote pedestrian-only zones are catching on in a big way, but the larger question of whether they can have a real, sustainable impact on how people commute in cities remains to be decided.

The pandemic has highlighted the urgent need for safe outdoor areas for children, many of whom have experienced mental and physical health issues due to restricted socialization and activity.

A flower that deceives and entraps!

Ceropegias are known as “deceptive flowers,” that allow themselves to be pollinated by the insects they attract without rewarding them with food. This month’s nature column reveals yet another natural wonder of the world we live in.