For several years now, ordinary citizens across the country with no end to their woes around poor roads and potholes have taken creative routes and come up with the most innovative ideas to make their dissent heard. For instance, Bengaluru-based artiste Baadal Najundaswamy has, since 2014, been planting fake crocodiles, organizing non-commercial modeling-shoots or etching art around sunken or unattended manholes to attract government attention. In another instance, a truck driver ‘buried himself’ in a pothole, in September 2019 to protest against bad roads and potholes on ‘Greenland Chowkadi’, a service road adjacent to National Highway 27. The Rajkot-based man said that he has been travelling on pathetic roads for years, but his breaking point came after he saw a woman fall-off a bike recently. And now, groups of citizens in Mangaluru have come together with their own plan to draw the civic body’s attention to the condition of roads in the city.

The activists said that they hoped that the innovative and peaceful awareness drive, highlighting the crumbling city infrastructure would encourage people to consciously elect responsible leaders. “People can pick any spot across the city, and can easily find roads or footpaths riddled with potholes and poor maintenance that hamper regular commute. Our main intention is to encourage civic participation which will bring results. Protesting and blocking traffic may not have long lasting impact. What the city needs is engaged and active citizens. Using innovative drives is the best way to bring about the required engagement,” MCG Group member and civic activist Roopan Fernandes told us.

Based on their survey, civic activists have pointed out that roads leading to Bejai, Bunder, Shaktinagar, Kulshekar, Surathkal, Kulai, Panambur, Kottara, Nanthoor, Adyar, Kadri in the city, are in particularly dilapidated or poor condition. “It’s not just a matter of ease for vehicles or people travelling in them, but also has implications in terms of a range of problems that come along with such obstacles. These are purely due to negligence of the authorities and create traffic slowdowns and threat to lives, due to haphazard commuting resulting from crossover of pedestrians and motorists into each other’s territory,” he said.

Activists also point out that at a few locations, sunken manhole covers, pothole-ridden roads and footpaths wetted by a mix of rain water and overflowing sewage water, create a nightmare for passers by. On several occasions, school going students and the elderly have been helpless victims, as vehicles passing over the water-filled potholes splashed them with muddy waters.

“At times, when we actively protest, the Public Work Department (PWD) contractors simply fill the pothole with construction debris and give a temporary facelift to the roads. But less than a day after the traffic resumes or witnesses rain, the craters of the road re-emerge,” said Rohan Shiri, a frustrated citizen and MCG member.

Relying on selfies to create awareness

As a matter of fact, it was Rohan who came up with the idea of ‘Selfie with pothole’. “Taking selfies has become a norm. Why not do it for the betterment of our city? My main intention of starting this drive was to jolt people out of their comfort zones,” he said.

MCG hoped that its drive would encourage people to bring out the true picture of public facilities and trigger efforts on the part of elected representatives to address the issues. “Such campaigns alert the civic agencies that the people are aware of the lacuna in leadership and shortcomings of the previous tenure. It also makes those vying for seats in the local government aware of the need to compulsively address immediate, day-to-day issues before making ‘inflated’ promises,” Rohan added.

Creative displays to highlight the poor road conditions in Mangaluru is not uncommon. In September 2019, two schoolgirls Adlin D’Silva and Nia Govind had enacted a moonwalk near Central Vegetable Market in the city. As the video of the girls went viral, the MCC fixed the potholes on that road. The duo was inspired by Bengaluru based artiste Baadal Nanjundaswamy – who had earlier pulled a similar feat in Bengaluru to draw the attention of civil authorities.

On October 12th, another social activist Arjun Mascharenas had launched a silent-solo-protest, plagued by the battered condition of National Highway 66 (NH-66). He was later joined by a few others. 33-year-old Arjun’s protest made the National Highway Authority of India (NHAI) get its act together, even as the protest was in progress. NHAI personnel were ferried to the spot and repaired the damaged stretch at Nanthoor Circle towards Mangaluru city.

Given the condition of the roads, the selfie campaign picked up momentum in no time with regular road commuters stopping by to upload their pictures by the nearest potholes, across locations in Mangaluru such as Central Market, Nanthoor junction and other areas. The selfies were posted on social media channels such as Twitter, Facebook and Whatsapp with tags of Mangaluru North legislator Bharath Shetty, Mangaluru South MLA Vedavyas Kamath, Member of Parliament Nalini Kumar Kateel and Dakshina Kannada Deputy Commissioner.

Even in the backdrop of election notification for Mangaluru City Corporation (MCC), the local Public Work Department (PWD) sent its teams to temporarily fill the potholes with gravel. However, speaking to media Rohan said that the pothole in the city corporation is an ever relevant issue. “People complain to the local corporators, but feel helpless when their concerns are not resolved. But at this point (during polls) people actually have a choice in hand; we want the ‘Selfie with Pothole’ campaign to remind people of the plight of their local infrastructure, so that they make an informed, conscious decision when they cast their ballot,” he said in the run up to the recently held elections. 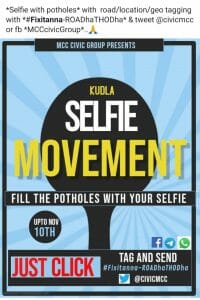 On November 14th, results to the MCC elections saw BJP winning 44 of the 60 wards and headed to form the new local council. The BJP MP of Dakshina Kannada and party’s state president, Nalini Kumar Kateel listed out various priorities that the new council must immediately address providing corruption-free and accountable civic administration; including establishment of ward committees. “It has been a long-standing demand of Mangalureans that they should have ease of commute; every corporator must monitor the laying down of high-quality, durable, and pothole free roads in the respective wards,” he said.

Whether all this will lead to better, more durable roads in the city remains to be seen, of course.

No one really expected the CAQM to immediately clear up the smog. NCR residents will simply have to wait and hope it shows results next year. The question is, will it?

It’s only the second time in a decade that Kashmir has seen such heavy snowfall in November, and it has made lives more difficult for citizens, already facing the effects of a three-month lockdown. Here’s how the administration and people are coping with the vagaries of an early winter.

Debate over GST on sanitary napkins: What are we missing?

A recent comment by a Kannada actor defending GST on sanitary napkins and terming them as a western imposition sparked off a furious debate on social media. But have the shrill arguments clouded the nuances of the issue?