The first ten days of November 2017 has seen a furious and unprecedented level of dialogue and mainstream-media conversation around the topic of air quality, specifically in and about the city of New Delhi. While the situation in the national capital is indeed dire, a large part of that conversation has been aided by citizens, journalists and community activism groups having access to scientifically validated real-time, hourly-updated data of the air quality levels in their neighborhoods and surrounding areas.

The conversation around air quality levels for several years primarily involved scientists and researchers from leading Indian institutes and a few committed non-profits and policy research groups. The introduction of scientifically validated real-time data has suddenly enabled ordinary citizens to start tracking and monitoring their levels on a daily basis and to start questioning their elected representatives on the steps they are taking to mitigate the problems.

Public health experts also were tracking real-time data of air pollution levels and started sharing their perspectives on the issue:

Yet another reminder that whether it be stubble burning, brick kilns, thermal power plants or industrial emissions, the impact is widespread. Nothing shows that more clearly than the extremely high AQI figures in the indo-gangetic plain right now. pic.twitter.com/WOYYII0nRP

And citizens from everyday walk of life started reporting real-time data too:

Air quality levels as recorded over the past 1 hour. #breathe pic.twitter.com/HkZha6KaIt

The access to such data has allowed a more focused and credible dialogue to happen around the critical and time-sensitive issue of air pollution. The alerts and health advisories related to air quality need to be issued in a timely context (on a daily or weekly basis) and not a few months before or after. The access to real-time data in the hands of citizens mean that elected representatives and policy-makers who have access to budgets and the responsibility to implement effective policies  can be questioned more regularly and not only during election time. This is a good thing.

One of the reasons for the level of focus and dialogue happening in the national capital right now is also because of the very high number of air quality monitoring stations that are reporting real-time data from different locations there. 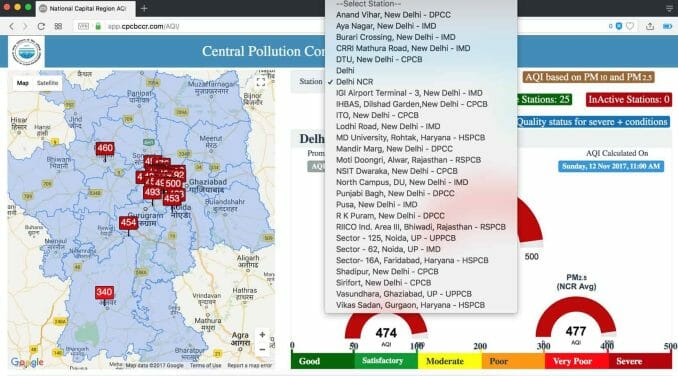 Are we doing enough?

New Delhi has a disproportionate number of real-time air quality monitoring stations, as reported in The Wire. Being the national capital region, having the highest population in the country and the maximum resources (financial, technical/scientific and administrative), administrators in New Delhi have a responsibility and are in a position to set the direction that can be followed by the rest of the country.

The neighbouring state of Uttar Pradesh, having a population of over 200 million people has the next highest number of continuous air pollution monitoring stations across the state, a meagre 10!

Singrauli, a town of over 1.2 million people and a designated Critically Polluted Area (CPA) in Madhya Pradesh has no real-time government monitoring stations. This is symptomatic of the pollution monitoring situation in the country.

Similar diurnal trends in air quality have been observed in the cities of New Delhi with a significant difference between the peak levels and the lowest PM2.5 levels during the day.

Insights based on such hourly real-time data can make a direct policy level impact. School timings, especially timings for outdoor/playground activities can be adjusted based on real-time PM2.5 levels.

The Haryana Education Minister released a directive on November 8 to officially change the school timings to 9am to 3.30pm. Steps such as these are examples of a responsive government policy framework. More such policy directives should be encouraged, which are brought about by citizen voices and backed by sound scientific data and information.

Promptness and participation: The key to solutions

The US EPA along with the California-based SCAQMD (South Coast Air Quality Monitoring District) has an advanced programme for performance evaluation of “low-cost” air quality sensors. They have established the “AQ-SPEC” (Air Quality Sensor Performance Evaluation Center) which has evaluated and validated a large number of “low-cost” particulate matter (PM2.5) sensors against Federal Equivalent Method (FEM) grade equipment. The results available on their site clearly indicate that the “low-cost” sensors have highly correlated data with reference grade equipment.

In India, the Department of Science & Technology (DST) in collaboration with Intel have launched a Research Initiative for “Real-time River Water & Air Quality Monitoring”, administered by the Indo-US Science & Technology Forum (IUSSTF). Initiatives such as the one launched by DST-Intel have the right balance of encouraging low-cost monitoring initiatives along with the rigour of building a scientifically-validated and calibrated network.

The building of scientifically validated real-time low-cost air quality monitoring networks in India has been underway for the past few years. An important and critical step in this is for policy-makers to be able to make their policies become responsive to real-time conditions that are affecting the citizens.

The city of New Delhi has developed and launched the “Graded Response Action Plan (GRAP)” in January 2017. The plan received formal approval from the Environmental Pollution Control Authority (EPCA) only in October 2017.  Even after having a responsive policy in the city, the implementation was found to be severely lacking. An analysis by IndiaSpend has found that the state government should have released over 30 alerts for air quality levels which it never did.

While the government agencies are slow to respond, it is incumbent upon citizens to become aware of the environmental pollution conditions in their own neighbourhood. Awareness is half the problem solved. Once citizens become aware and start asking the right questions, solutions will start to emerge. There is not going to be one single panacea for the air quality problem that is afflicting Indian cities. It is going to require hundreds or thousands of smaller citizen initiatives to make a difference. The time to start on that is today.

About Ronak Sutaria 1 Article
Ronak Sutaria is the founder of UrbanSciences – an initiative focused on building a scientifically-validated air quality monitoring network in India. He is based in Mumbai, India and can be reached at rsutaria@urbansciences.in

Nalin Kumar Kateel, two-time BJP MP from Dakshina Kannada constituency, is contesting again from the seat. Though Kateel’s performance was fair in terms of attendance and questions asked in parliament, local leaders and cadre consider him an underperformer.

Voting over in Chittoor; here’s what citizens expect elected MLAs and MPs to deliver

Andhra Pradesh voted to elect their MLAs and MPs on April 11th; meanwhile, residents of Chittoor city have put together a comprehensive manifesto that speaks about the welfare schemes they would expect their chosen leaders to implement.

Pune hospitals unable to cope with COVID surge. What could be the solution?

Some housing societies in the Pimpri-Chinchwad area, which has seen a spurt, are setting up quarantine zones within the premises. A jumbo COVID care centre with 1600 beds has also  been set up.