Chakri S is a regular user of the Hyderabad metro, the city’s largest ever infrastructure project. He finds it more convenient and cheaper than using the city bus. But Chakri is one of the lucky ones. As experts are pointing out, the Metro, planned in 2004, has been unable to keep up with the rapid growth and expansion of the city which has nullified some of the original assumptions that went into drawing up the metro routes. “For example, the Miyapur line should be extended upto Patancheru/Lingampally where there are a large number of factories,” said Chakri. “Similarly, connecting HITEC City to Jawaharlal Nehru Technological University (JNTU), Kukatpally, will help people working in the IT sector”.

“There has been a fundamental shift in the living areas in the city,” explained Prashanth Bachu, a Subject Matter Expert (SME) on Urban Transportation. “The Metro line was originally planned from Miyapur to LB Nagar, which had a high concentration of people residing along that route. But now the city is sprawling. Also, earlier, the city centre – areas like Koti, Abids, Secunderabad, Punjagutta, Nampally, etc – were the hub of commercial activity. Now the activity hubs have moved to the periphery, where the Metro does not operate. With the Metro, it will always be a catch-up game”.

Echoing the same view, Prof. C. Ramachandraiah, Centre for Economic and Social Studies (CESS), Hyderabad, also said that growth of the city has been much faster in the peripheries in the last four decades, than in the metropolitan core. “Any public transport model should be designed to the specific characteristics, history, heritage, street and traffic pattern of that city,” added Prof. Ramachandraiah.

The Hyderabad Metro Rail Ltd (HMRL) was launched with limited connectivity in November 2017. Out of the original Phase I length of 71.16 km across three corridors (red, blue and green lines), a stretch of 56.5 km and 48 stations (out of the proposed 64) is currently functional. This is helping commuters like Radha Kola, who works in HITEC City.

“I am able to travel a lot faster to work with the commencement of the Ameerpet-HITEC City line in March this year,” said Radha. “Earlier, I used to take shared autos. They are overcrowded and not very safe. Buses are very crowded, difficult to board and take around 50 minutes of travel. Now the Metro costs me the same but takes only 20 minutes. It is faster, cleaner, air-conditioned and far more convenient, now that ladies only coaches are there”. 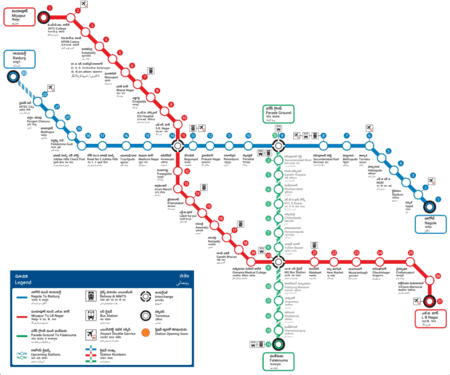 But against the few who are enjoying the metro rides are several people, who feel there were, and are, better alternatives to the costly metro project. “Building a metro costs more than Rs 250 crore per km and takes a long time to implement,” argued Prashanth Bachu. “Instead if just Rs 250 crore in all is invested in a Multi Modal Transport System (MMTS), including traffic signals, new trains and rakes and expanded routes, it can double the current ridership. In the current situation, what is required to address the city’s traffic problems are ultra-short-term solutions. What we need are actions that will make things better today, rather than hoping to fix them years later.”

Added Professor Ramachandraiah: “Activities undertaken for the Metro has led to defacement of some parts of the city and its 400-year-old heritage, causing irreparable damage to the streetscapes and street life of Hyderabad.”

The metro is also way short of its ridership targets. As per HMRL, the Metro system was expected to carry about 17 lakh passengers per day by 2017 and 22 lakhs by 2024. However, as on April 27, 2019, with only two partly operational lines (Red and Blue) in Phase I, the maximum it achieved was paid passengers at 2.55 lakhs and a total footfall of 2.71 lakhs.

One reason could well be the high cost of a ride, ranging from Rs 10 to Rs 60, depending on the distance travelled. “The charges are already high and they can be raised every year, which means even more of the city’s population may not be able to avail this facility in the future,” said Prof Ramachandraiah. “The Competing Facility (CF) clause in the original agreement not only enables the private party to exercise monopoly on fares in the three routes, but also empowers them to levy higher tariff during peak hours.”

Srinivas Kodali, Civic Hacker and Co-Founder at Open Stats added that as the metro lines are laid parallel to some of the major bus routes with high ridership, it is impacting the income of the road transport corporation as people on these routes shift to the Metro. “For example, three popular bus lines, No. 225 (between Patancheru Bus Terminal and Koti Bus Terminus), 113K/L (between Lingampally and Uppal Depot) and No. 113E (between Uppal Depot and ESI Bus Stop) has the Metro overlapping almost 100 per cent of its stations with the major bus stops if you include Metro interchanges,” said Srinivas.

“The effectiveness of the Metro on these high ridership routes can only be ascertained when we have the actual figures of the average ridership of the buses during peak and non-peak hours – past and present. We have seen a similar trend in Bengaluru where passengers switched from buses to Metro. We also need to understand the effect of the Metro on people using private transport. Unless we have data about the shift in passenger patterns across different transportation systems, even with the current usage patterns, the Metro may not even be close to its estimated unique ridership levels”.

Traffic movement on the roads has also been slowed down by the whopping 2,599 pillars constructed over the last seven years across the three metro corridors in Phase I and the never-ending street-level work that has turned major thoroughfares into bylanes. In addition, one continues to get caught on arterial roads, with traffic coming to a complete standstill during peak hours. The diversions and bottlenecks only further aggravate the city’s commuting nightmare. “Of the 1.1 crore daily trips that happen in the city by motorised means, close to 28 percent of commuters travel by buses being operated by the state road transport corporation,” said Prashanth Bachu.

“This is half of the 42 per cent bus users a decade ago. Another 1.5 per cent use the rail-based MMTS being operated by the South-Central Railway (SCR). If the state government focuses on funding and strengthening MMTS and the road transport corporation, a large percentage of the population will be able to travel more easily and cheaply. The Hyderabad Metro, even with more than 70 per cent of the Phase-1 network complete, is barely catering to two percent of the traffic. Even assuming this will grow to 10 per cent in the next three years, the remaining 90 percent commuters will continue to struggle with their travel needs. That is exactly why we need to work on strategic short-term solutions that can give relief to a large number of commuters within a few months. If not, people will continue to find their own alternatives for transport, cars, scooters, taxis, shared autos, etc”.

The other major problem with the Hyderabad Metro is last mile connectivity. Although some recent announcements have been made, feeder services continue to be a problem which HMRL says it is working on along with other government agencies. K. Bhavya Manasa and K. Aadya Gayatri, school students, shared their recent experience on this. “Our family took the Metro from Miyapur to Uppal Stadium to catch the IPL final,” they said. “Although a little costly (Rs 480 for 4 people both ways), we were able to take the Metro back too as they ran special trains late at night for those who were traveling for the matches. The issue we faced was there was no parking available at the Miyapur station, so we had to park our car at a friend’s house and take an auto to and from the Metro.”

“We cannot compare Hyderabad with other cities as each city has its own unique socio-economic characteristics which influence their adoption of Metro,” said Srinivas Kodali.“Many of Hyderabad’s metro stations are already constrained in terms of easy movement of buses due to narrow roads or parking of private vehicles. The stations also have service roads underneath them for other public transport to drop-off and pick-up passengers, further adding to the traffic woes. A feasible solution is for the state government is to actively encourage and support the usage of cycles or walking for shorter commutes. Electric three-wheelers (e-rickshaws) or cycle rickshaws can be other viable feeder options”.

Given all that, it is not surprising that HMRL needs to do a lot more before it can reach anywhere close to its expected ridership. With a current expected patronage of a little over 2 lakh people per day, Hyderabad Metro is lagging far behind Delhi (28 lakhs per day), Kolkata (5.5 lakhs) and Bengaluru (4.2 lakhs). “The corridor I from Miyapur to LB Nagar is considered the busiest corridor and two corridors (I and III) are operating fully,” said Prof. C. Ramachandraiah, “These two corridors should have been currently carrying 11.74 lakh passengers (as per 2014 estimates). But what the metro is actually carrying is only an average of 2.20 lakh passengers per day, less than 19 per cent of its own estimates. As a transport project, Hyderabad Metro is a miserable failure”.

About Kolla Krishna Madhavi 11 Articles
K K Madhavi is a writer based in Hyderabad. Madhavi is a nature enthusiast, occasional blogger, avid reader and sporadic photographer. She also has years of corporate experience, including recent stints at IIIT-H and Google. She may be reached on Linkedin at www.linkedin.com/in/kollakrishnamadhavi or on Twitter at @mirchikatadka.

Mitigating the curse of the car in Indian cities

On one hand, there is a thirst for bigger and more expensive cars. On the other, there is the state’s inability to provide strong enough disincentives and efficient alternatives. Together these are destroying our cities and our communities slowly but steadily. What is the way out?

Why healthcare workers on COVID battle frontline need protection themselves

As confirmed coronavirus cases rise exponentially, the government’s action plan, focusing on hotspots and containment zones, relies largely on community health workers such as ASHA. But, overworked, underpaid and lacking basic PPE in most places, they remain one of the most vulnerable sections.

In schools, hospitals or shrines, you can’t escape fire risk in urban India

The Kamala Mills tragedy in Mumbai has suddenly led to fire safety inspections in restaurants and eateries in many cities, but there are reports aplenty to show that fire preparedness anywhere in these cities is abysmal.