As the new Goods and Services Tax was rolled out, sanitary pads were listed as attracting 12% GST. Following this, many women activists demanded the government waive off taxes on sanitary pads, while many others went all out to defend the taxes. As a result, the nation is finally talking about sanitary pads!

A raging debate in particular was fuelled on social media by the media statements of Kannada actor and member of Bharatiya Janata Party (BJP), Malavika Avinash. A clip from Prajavani, a Kannada newspaper, made it to social media, which quoted her as saying that sanitary pads were a western conspiracy dumped on India. 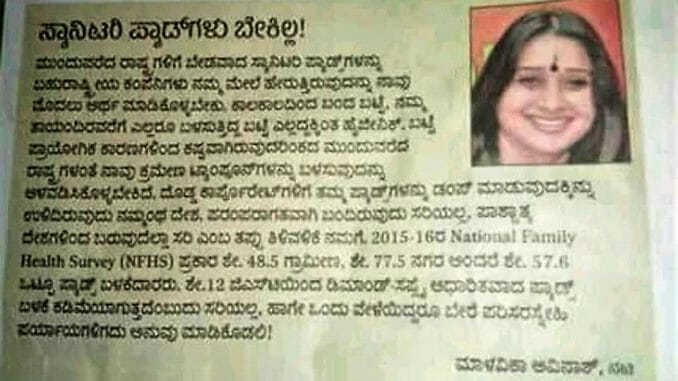 The quote headlined ‘Sanitary pads are not needed’ said:

We need to understand the hypocrisy of the multinationals who are dumping sanitary pads that are unwanted in developed countries. Cloth used by our mothers during menstruation is the most hygienic option. Since using cloth is impractical due to many reasons, we have to get used to tampons. India is a country where big corporations want to dump their products. We wrongly think that whatever comes from the West is good and the traditional methods are bad. According to the National Family Health Survey (NFHS), about 48.5% rural and 77.5% urban women, about 57.6 % of the total women population, use sanitary pads. The impression that 12% of GST will reduce sanitary pad sales is wrong. Even if it does so, let it make way for better eco-friendly options.

This statement comes at a time when the solid waste management circles in Bengaluru are busy debating how to eliminate or reduce every possible waste including sanitary napkins. It attracted a lot of reaction ridiculing the logic of asking women to go back to cloth if they find GST on sanitary pads unacceptable.

Finally Malavika reacted on her Facebook wall, by saying that she was widely misread, misinterpreted, misquoted and misunderstood.

“An issue that is best grasped by women has even been politicised by some men on social media. To begin with, #GST has brought down taxes on sanitary pads — what used to be 14.5% vat+other indirect taxes, has come down to a flat 12% GST. Issues of functionality is what compelled us to move from cloth to pads. Never once have I said let’s return to cloth or do not use sanitary pads. I have used pads as much as any other girl or woman has,” she confessed.

But even as she stressed on the freedom of choice for women, she added, “The question also is how do you dispose the sanitary waste that is generated by the pads? FMCG companies do find us, developing countries, to be a dumping ground for pads that the west has moved on from, to tampons and cups which we perhaps also need to adapt to with the changing times.”

The central government has also released a press note issuing clarifications on the GST structure for sanitary napkins and explained whytax cannot be zero for sanitary pads.

While the debate spurred by the actor’s comments is history now, it has brought out many important points that call for an in-depth look.

The farce of western conspiracy and tampons being better than pads

One argument was that we should move towards tampons. Tampons are made of the same material as sanitary pads, though they are slightly more expensive. They sit closer to uterus, and hence can be more harmful than a sanitary pad in case of extended hours of usage for whatever reason, as the body is more prone to Toxic Shock Syndrome (TSS).

There are compostable tampons in the market, just as there are compostable sanitary pads. But these biodegradable products are expensive, and not affordable by all. Thus, the argument that tampons are better than pads holds no real ground. Besides, the chances of women who are not sexually active going for tampons is less due to cultural reasons.

Cloth or reusable pads have been widely used to manage periods, much before disposable napkins came to the market. The world over, women have had the same biological problems and solutions tend to be similar. A cursory search on the Internet shows that even western or European countries had their own taboos and rituals around menstruation, and women went from wearing nothing to wearing cloths, which evolved into cloth pads and cotton disposable sanitary pads. There is nothing Indian about this situation.

When cloth pads made way for disposables, the trend spread to all parts of the globe including India. Supply was demand-based, driven by the convenience and ease of use it offered, not because the west had dumped a product on an eastern country.

Bringing in the argument of desi versus foreign products, or saying one disposable option (tampon) is fine but the other (pad) is not, just dilutes the real argument for eco-friendly causes. It is like throwing the baby out with the bathwater. The need to go for eco-friendly alternatives is real, and such misplaced arguments derail it.

Sanitary pads are a demand-driven business

Can we blame the sanitary napkin-manufacturing companies for the mess? They are no different from local plastic bag manufacturers who have gone to court against the plastic ban. Their business model is based on disposables – they have no option but to promote it. Moreover, it’s a demand-driven business.

One thing is certain: the feminine hygiene market is the biggest in Asia Pacific because of our large population. To that extent, global feminine hygiene product manufacturers must be benefiting from the Asian consumption patterns and choosing these markets as preferred ones. But to term that as western imposition is unfair, because it is the convenience and freedom that sanitary pads offer women, that has driven its demand. Till recently, there had been little innovation and awareness on eco-friendly alternatives, hence disposable pads became popular.

While the corporates manufacturing sanitary pads heavily quote an AC Neilsen survey that says only 12% of women in rural India use sanitary pads, the surveys by the government peg the figure of usage at over 48%. This is where the real concern lies – in the magnitude of waste produced and the disposal. This article explains how sanitary pads are being increasingly used in rural areas.

Let us take the example of Karnataka. The population of Karnataka is 6.5 crore, with a male to female ratio of 1000:968 as per Census-2011. This means that about 49%, or 3.2 crore, of the population are women. Once again, by the age distribution available through census 2011, about 62.7% of total women are in the age group of 10-50 – that is roughly about 2 crores of women, menstruating every month. Out of this if 57% of women use sanitary pads, it makes for 1.14 crore women using sanitary pads.

Even if we estimate conservatively that disposable waste produced per woman for one cycle is 0.75 kg, the menstrual waste produced for 1.4 crore women in the state per month is 85,50,000 kgs – that is 8550 tonnes per month at the minimum.

Now, where does this waste go? How is it disposed off? In rural areas they are burnt by putting it into the ovens or open fires, or dumped in soil. In small towns, they are sent to nearby makeshift landfills, and in metros like Bengaluru, they are sent to incineration facilities.

According to the PIB press note, raw materials for sanitary pad are, super-absorbent polymer, polyethylene film, glue, LLDPE–packing cover, thermo-bonded non-woven, release paper and  wood pulp. Out of these, most are synthetic, non-organic materials, which cannot be disposed of easily.

Sanitary pads contain leakproof layers made of synthetic materials, which produce a type of chemical called dioxins when they burn. These chemicals cause air pollution and are the cause of many health hazards such as cancers and respiratory issues.

There are mini napkin incinerators being sold in the market, but they do not have safety mechanisms to treat the poisonous gas emitted. Scientific, closed incineration with European emission standards is the only way to handle this biohazard type of waste safely, and we lack these facilities in India.

Nobody sees the connection between a cancer patient and open air plastic burning, but the threat is real. This article explains the nuances of sanitary waste management in India.

There is a huge divide among those who have done away with sanitary pads and gone for sustainable eco-friendly and pocket-friendly options, and those who are not aware of any alternatives at all. This is making the debate purely one-sided, lacking nuance.

The former believe that the sustainable options that fit them will fit anyone, without thinking about the practical limitations of other individuals. But this is not possible for all due to many cultural and practical reasons.

The latter believe cloth pads are all about long pieces that need to be washed by hand and dried secretly, and they don’t know anything about cups or modern cloth pads, period panties etc. that have come into the market of late, or about thriving awareness groups like Sustainable Menstruation India. How many of them will not object or feel awkward about hanging up a cloth pad in the clothes line along with other washed items? Use-and-throw pads become the most convenient option for women in such houses.

No alternative is perfect, or is without flaws or compromises; so none of us can tell others not to wear sanitary pads. Awareness on pros and cons of the alternatives is the key.

Frankly, without the cups or better-designed, quality cloth pads available nowadays (compared to ordinary cloth), most of us would not have switched from sanitary pads to sustainable alternatives. Promoting awareness towards sustainable options without pushing people towards more inconvenient options using ideological arguments, or patronising those who cannot switch to sustainable options, is not desirable.

Uninformed division based on ideologies is dangerous

What is most concerning in the sanitary products dialogue today is the lack of awareness and even disregard of the other perspective. Both sides fail to understand that it is not about BJP vs Congress as we see it on social media, neither is it about western imposition vs Indian tradition. It is about a necessary evil and eco-friendly alternatives available today.

All said and done, sanitary pads are mostly about convenience at the cost of the environment. Politically motivated shallow statements issued with an aim to justify the government’s action do nothing to serve the cause of eco-friendliness. They only divert the issue from the core issue at hand.

The pandemic has highlighted the urgent need for safe outdoor areas for children, many of whom have experienced mental and physical health issues due to restricted socialization and activity.

A study ascribes monetary value to the price of unplanned urbanisation in Delhi, in terms of the decline in total value of ecosystem services from 7 natural elements.

The wonder of the humble Balloon Vine

I often come across the Balloon Vine (also called “Love in a puff”) on my walks through the fields and forests around my city. It’s a very common vine, indeed….and in fact, in New Zealand, it is